Martha Boyle Reminisces About Her Life…

Martha Boyle Reminisces About Her Life on Cumberland Island, GA 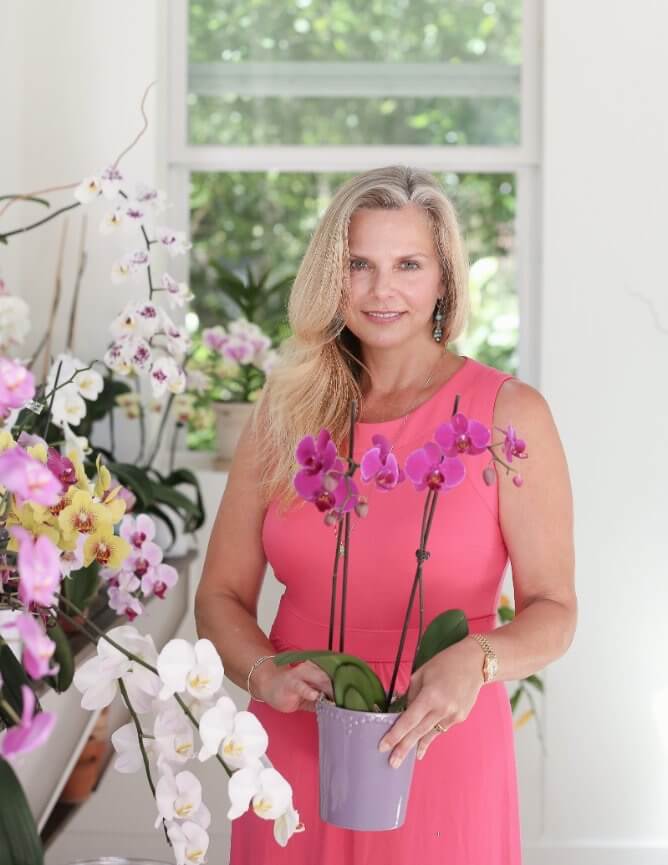 I met Martha after her gardens were featured on the Cummer Garden Walk Series on the Omni Amelia Island Plantation.

I interviewed her for South Island Living magazine and her beautiful orchid house was featured in last month’s issue.

I was expecting to see her garden and it is absolutely magnificent…She and her husband, Rick, have lived in the house less than a year, but it looks like they have been there for years.

What I wasn’t expecting; to spend the entire afternoon with Martha, hearing about her history…living on Cumberland Island for 12 years, then living in Old Town Fernandina, before building their home on Amelia Island Plantation.

“During the earlier years there, Ms. Rockefeller (Nancy Carnegie Rockefeller) was still living and I was so blessed to get to know her. I was enthralled listening to her stories and she didn’t mind at all when I would take a legal size yellow papered pad to write notes from her stories. One story she told me was her role in Cumberland Island becoming a National Park. Of course, I already knew a lot of this history, but coming from her, it was different. It was more than just an accounting of transition of power and ownership of an island. This was very real to her. Cumberland was her home, a place she cherished and protected. She told me in great detail about the years when Charles Fraser started buying up lots on Cumberland. She, nor anyone, had really thought too much about it. He even had electricity brought to the island. All along, Charlie was planning his development of Cumberland Island. One year, I think it was in 1968 or 1969, Ms. Rockefeller had a Christmas party and invited island residents, including Charlie Fraser. He took that opportunity to roll out a set of conceptual plans and announced his intention to develop Cumberland. Mrs. Rockefeller stood and graciously and quietly, and with dignity said, ‘Over my dead body will that ever happen’ . I guess she asked him to leave, but I don’t specifically remember her saying she did. That was when her fight began to save Cumberland from development and I was fortunate to hear this story from her and she told it with passion. I remember one year during Thanksgiving week, we were visiting in her kitchen. A turkey was in the oven and she was occasionally basting it. She told me she was putting together a book, a history of her life on Cumberland, sharing her memories and her family photographs. She wasn’t doing this to sell the book. She was doing it as a gift to her family. When she finished it, maybe a year later, she gave me a copy and it is truly one of the most special gifts I have ever received.

I also got to know Ms. Lucy Ferguson during those years. Anytime I was driving down the beach and saw her jeep, I stopped and sometimes we talked for hours. She was a fascinating woman and I think the best word I can think of to describe her would be “fearless”. I loved hearing her stories. I never had a legal pad to take notes, but her stories weren’t the kind you would write down anyway. They were just bold and interesting stories about her life on Cumberland. It’s funny to think about it now, but they (Nancy and Lucy) were cousins and I know they cared about each other, but their stories were so different. I will be eternally grateful I was fortunate enough to know these two women. They weren’t just women, they were the true definition of matriarchs.”

Martha taught school on Cumberland Island, but not in a traditional school house.

“Once the few young children living on the island were becoming of school age, I realized there was a need to educate them on the island and I knew the logistics of transportation to and from the mainland would be challenging. Having been a school teacher previously, I worked with the parents of the children and started a private school on Cumberland. The school room was in the east library at Stafford House. The house was in disrepair as it had not been lived in for more than 40+years. With help from the parents of the school children, we cleaned and repurposed the old library. Desks and school supplies were brought in and the historic library, filled with first editions from the Thomas Carnegie II book collection, was transformed into a one room school house. Only the library and a small bathroom comprised the school. The rest of the house remained as it had been for 40+ years. Ms. Lucy Foster, who had inherited the Stafford House, was yet another lady I adored. She was Mrs. Rockefeller’s and Ms. Ferguson’s cousin. Most of the time she lived in Maine. She was proud that she played a role in establishing our school. It was a very special gesture for her to let us use Stafford for the school.”

Ms. Lucy Foster generously gifted Martha with a few books from the library which she cherishes to this day.

“The school started with 2 students, Hadley Ferguson and Savannah Puckett, both kindergarten age. Within a few months, Hannah Fuller arrived back on the island and joined the school. She was in 1st grade. Later that school year, TC Haffenraffer, Ms. Lucy Foster’s (owner of Stafford) grandson from Maine came to stay on the island for several weeks and he joined the classroom. He became a regular transient student, coming to the island for extended visits. By the 3rd year, there were 5 full time and 2 transient students ranging in grade level from kindergarten to 5th grade.”

During my visit I asked Martha how she structured the school day, how she compensated for the socialization most kids get in larger schools. Her answer…

“A typical day: It was very structured, it had to be in order for the curriculums to be completed for all the kids. We typically followed a regular school schedule, Mon.-Fri. 8:00-3:00. We always had recess outside if the weather was nice and if not, we just turned the school room into a playground, not to mention we had a great big creaky mansion full of cobwebs where hide-n-seek took on a whole new meaning! The kids and I brought our lunches to school and ate outside weather permitting. We took mini field trips on the island (to Dungeness, Plum Orchard, etc.) and the history of Cumberland was an intricate part of their education.

We tried to get off the island as much as possible for field trips…White Oak Plantation, The Cummer Museum in Jacksonville, a private zoological tour at Busch Gardens, Universal Studios and Disney. We would also leave the island to go trick or treating at Halloween.

Washington, DC was a big field trip. Jack Kingston, who was at that time a Georgia Senator, and had visited Cumberland many times, really took care of us and arranged so many activities for the kids.

We were invited to St. Marys Elementary school as guests to attend a school play. The kids toured the school and they got a small glimpse into how other kids were educated. We ate lunch in the cafeteria that day and it was a very big deal! Eating in a public school cafeteria with trays, going through a line and the noisy environment of about 100 kids having lunch in the same room… so normal to regular school kids…it was anything BUT normal for the Cumberland school kids! Being residents of the island, the kids weren’t exposed to the ‘normal’ things kids on the mainland were exposed to everyday, even the simplest thing like a school cafeteria. Their lives were very different. But they were creative and smart. Their imaginations were amazing! And I never observed them feeling unfulfilled by living this unique island life. They were happy, well rounded kids.”

Martha was known on the island as Ms. Martha. Most everyone called her that, whether they were a student or an adult. Teaching kids in constantly different stages of learning can be challenging and Martha had to learn to improvise quite a bit. Remember this was before the internet. They didn’t have cell phones. Lesson planning and resources weren’t at the touch of a few strokes on a keyboard. Her planning meant reading books, researching through various avenues to get the tools they needed. “No school libraries, (except the one with the most extraordinary collection…entirely too fragile to use for research), no way to hop in a car to go to a public library…it took a great deal of planning to make sure I had everything we needed for our school. We did have so much support. So many wonderful people donated books and supplies. It was an adventure…an honor to teach there.”

With Martha’s 12 years of living and teaching on Cumberland Island, comes a passion for its history and its geography. Martha was recently gifted a survey map of Cumberland Island, prepared in 1946 for The Lucy C. Carnegie Est… a special gift from Martha’s client, Mike Manzie (Manzie & Drake Land Surveying). 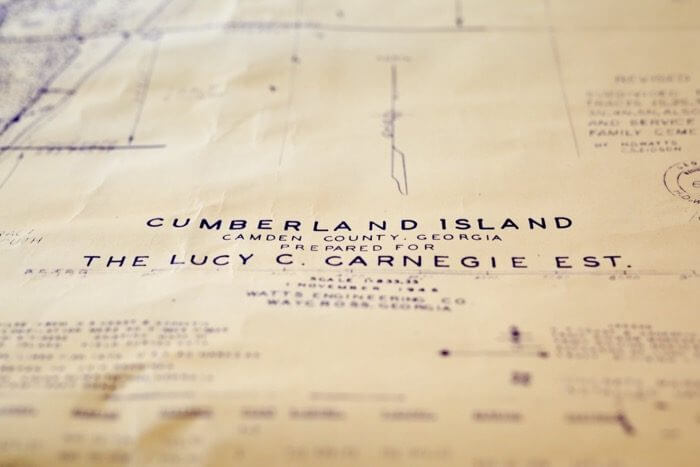 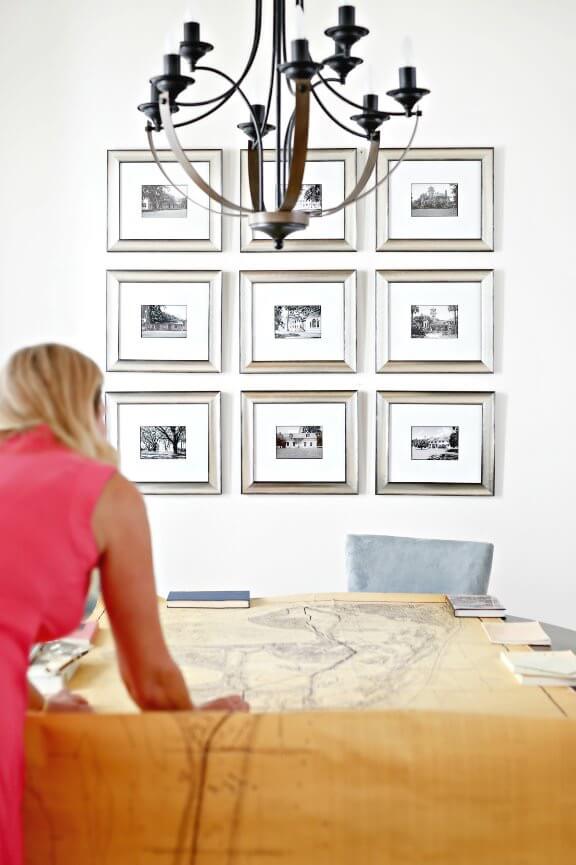 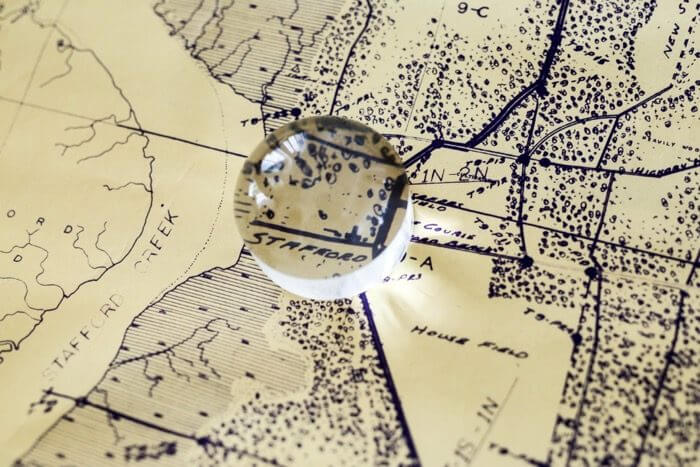 Highlighting the Stafford property where the school was housed.

Thank you Martha for sharing your stories, books, photos and maps with me. I have always been fascinated with the history of Cumberland. I shared with Martha the story of a special trip to Cumberland made in 1992. Dave’s mother took our family (Elizabeth and James were very young) to Cumberland on her boat. We left her dock on Amelia late in the afternoon and she navigated the river to find Old House Creek (with darkness falling quickly). This creek is north of Greyfield Inn and South of Plum Orchard and Stafford. We stayed in a small cabin close to the dock. We brought our food for the weekend and gas for the jeep belonging on property. What a treat to be able to drive all over the island. As many know, there are very few cars or trucks on the island. I realize now the only thing missing from that trip was…meeting Martha. She lived very close to that area and was living there during our trip!

FEELING THANKFUL ON THIS THANKSGIVING DAY

Today on Thanksgiving I am full of gratitude... THANKFUL FOR... family and... continue reading