Tailgating On The Quad

Tailgating On The Quad

When I think of tailgating at the University of Alabama, I think of Tailgating On The Quad. 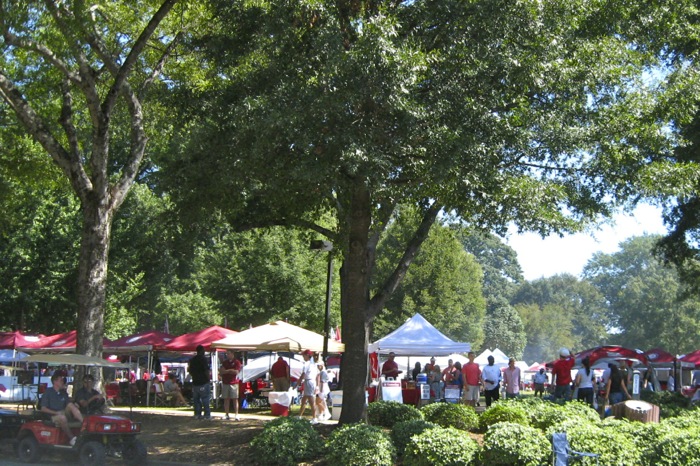 I look back to my college days and wonder why I never went to an Alabama-Tennessee game in Tuscaloosa.  Most big games were played at Legion Field in Birmingham because of the stadium’s larger size.  Tennessee never played in Tuscaloosa until 1999 after a Bryant-Denny stadium enlargement. 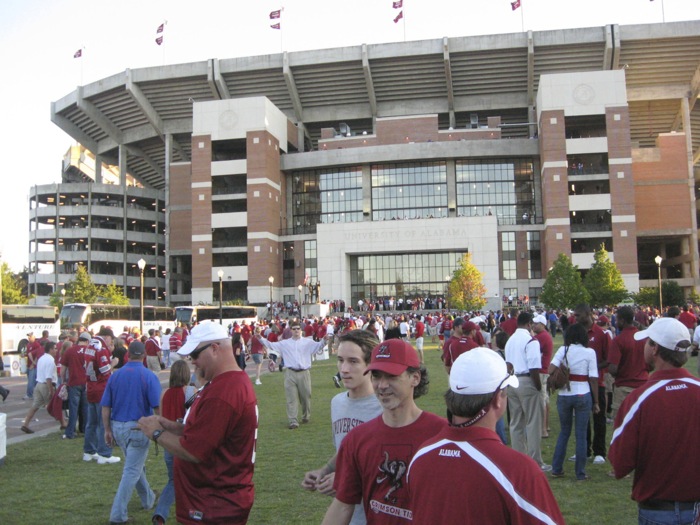 Therefore tailgating on The Quad is a fairly recent experience.  And what a Fabulous Experience! 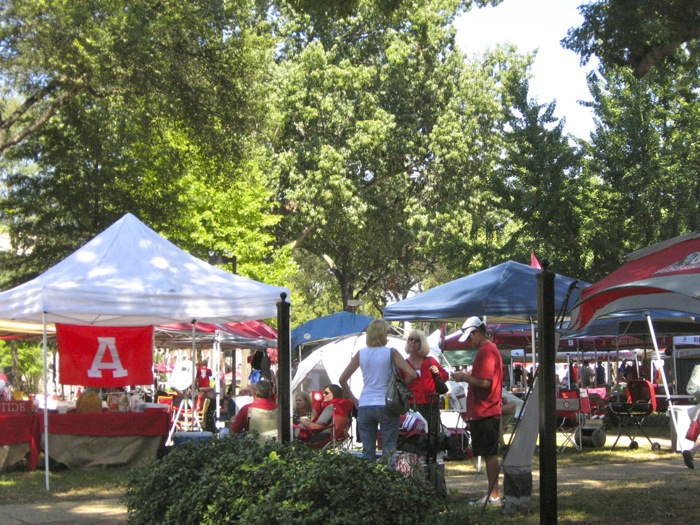 At a recent Alabama-Florida football game, Dave, our Gator daughter Elizabeth, and I arrived in Tuscaloosa ready to tailgate Alabama style.

We had secured a terrific parking spot from our good friend and avid Alabama fan, Derek.  We arrived in Tuscaloosa early and parked next to some of the nicest people I have ever met.  Myra and Tony Jeffreys became our fast friends, 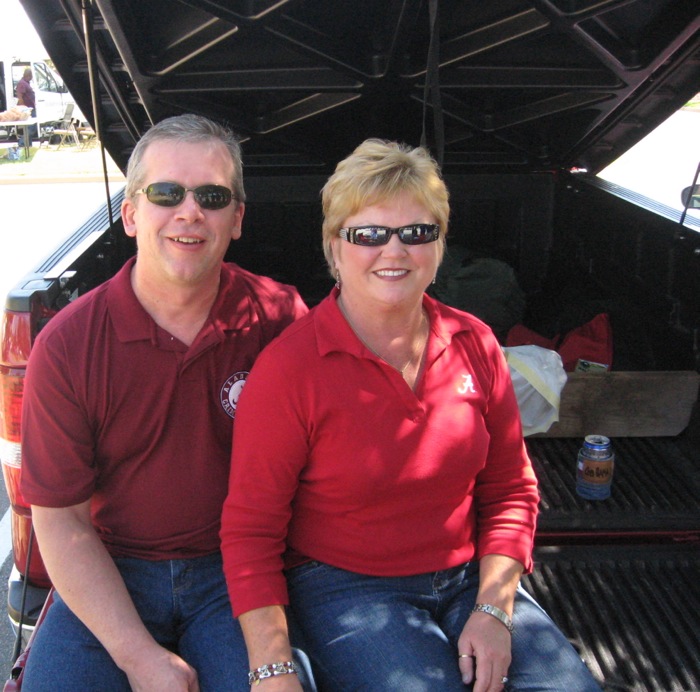 even though we had on our Gator attire.

I wore orange and white and my Tennessee button, which caused some confusion, but Myra and Tony were great sports. 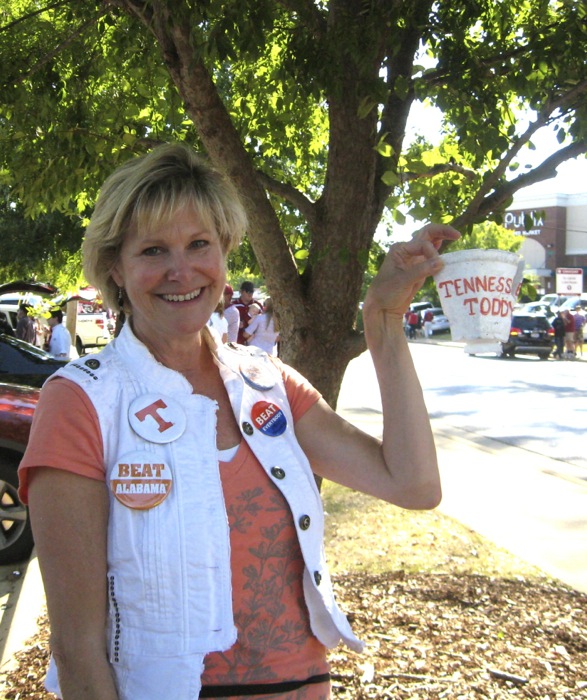 Dave, Elizabeth and I left our new friends  to roam The Quad.  The Alabama fans were so gracious, offering us food, drink and great hospitality.  I snapped away on my camera, taking pictures to use in my painting.

The Quad is a large 22 acre green space at the heart of the University of Alabama’s campus.  It is anchored by the President’s Mansion on the south.  Most of the campus  burned during the Civil War.  The President’s Mansion was spared due to the efforts of the president’s wife, making it one of the oldest buildings on campus. 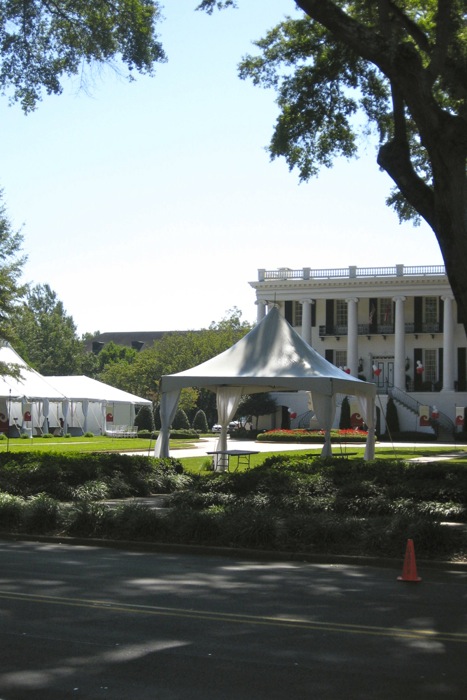 Denny Chimes, the famous bell tower,  is on the Quad.  Captains of the football teams have placed their hand and foot prints in cement at the base of Denny Chimes. 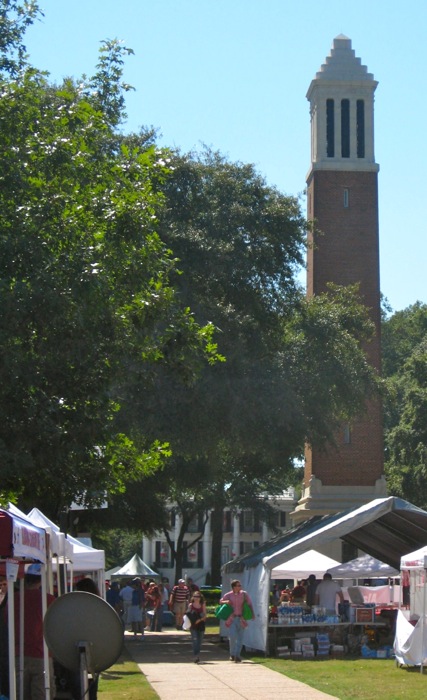 The Gorgas Library anchors the north end of the Quad.  The band plays from the library steps before marching to the stadium. 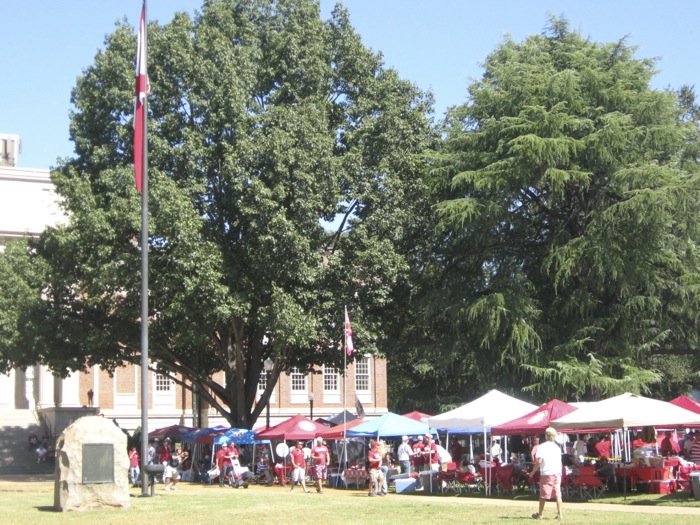 On game days The Quad is home to hundreds of tents, fans, good food, drink and lots of fun.  (I love this barbecue guy.) 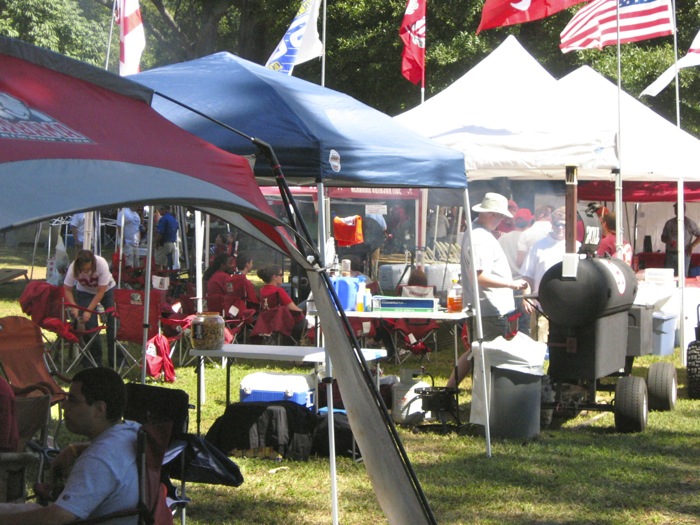 No cars are allowed on The Quad.  Tents, chairs, tables, grills, food and drink are dropped off or hand carried in.  I saw several people dragging wagons with barbecue and all the fixings. 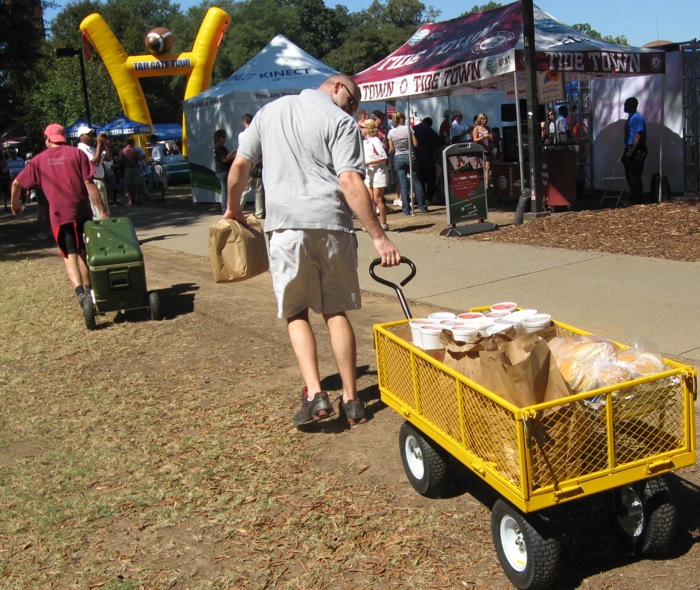 My “Tailgating On The Quad” painting includes The President’s Mansion and Denny Chimes.  The food depicts recipes sent to me from Alabama fans.

Tomatoes are included as the fruit for several reasons.  They are red as in Crimson, and the Bloody Mary recipe was given to me by an avid Alabama fan, Ken Yarbrough. 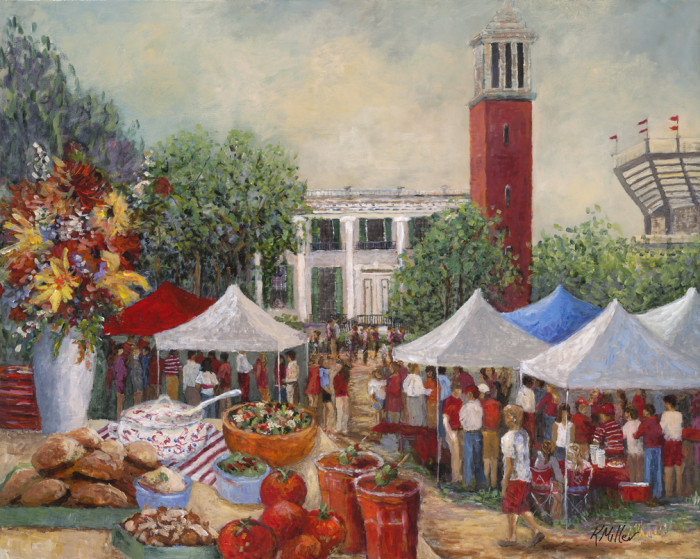 “Tailgating On The Quad” Alabama print would make a great Father’s Day gift.

We slowly made our way back to our parking spot to spend more time with our new found friends.  Our Gator numbers grew as friends of Elizabeth and James joined our tailgate. 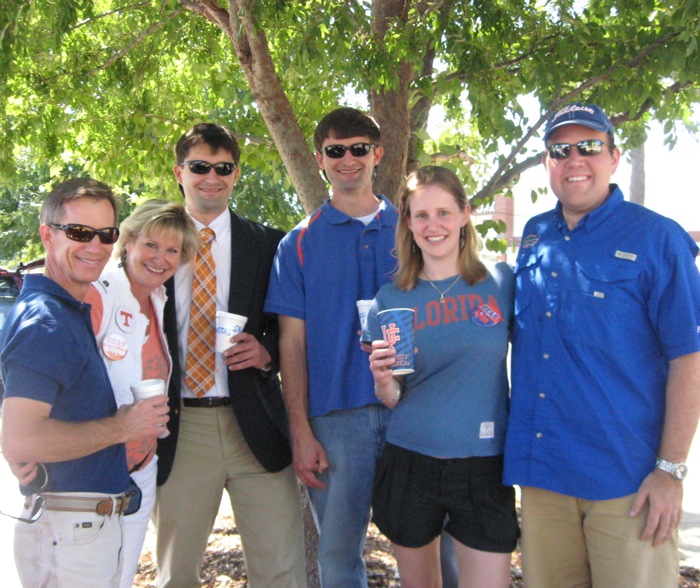 Derek arrived in his Alabama attire and the ribbing continued. 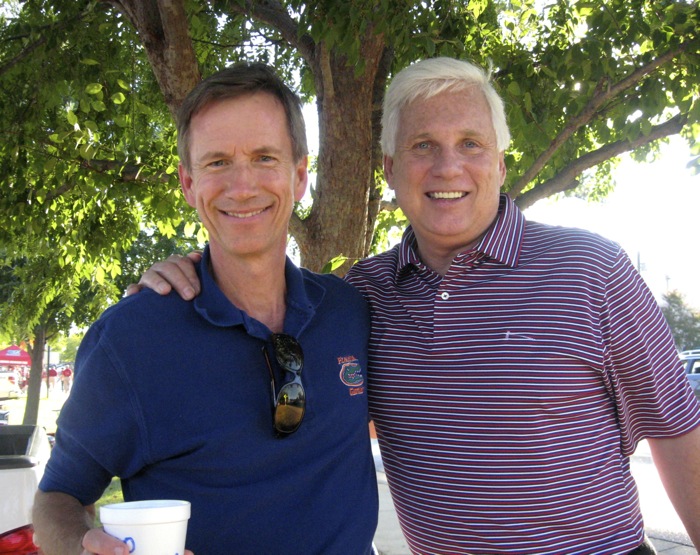 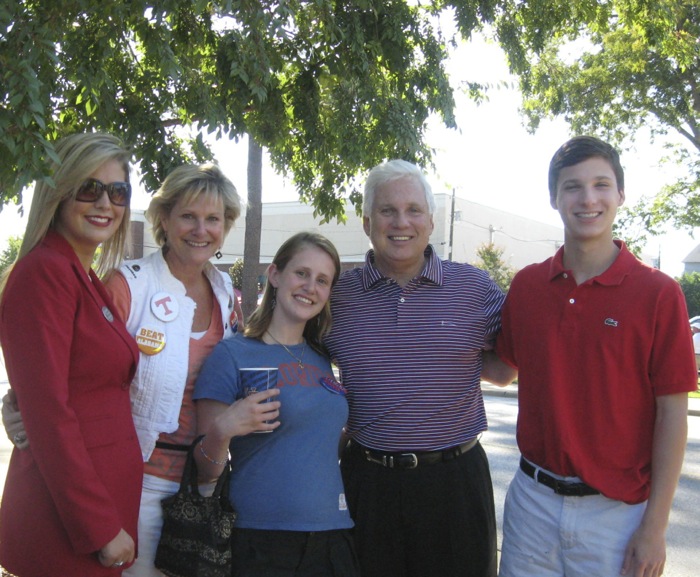 When Myra and Tony were ready to go to the stadium, they left their truck’s tailgate open, saying we could put our trash in the back.  “Just please close it up when you leave.”   Such a nice thing to do for visiting fans.

On our way to the stadium we caught up with Ann Kathryn and her girlfriends decked out  in their Alabama fashion. 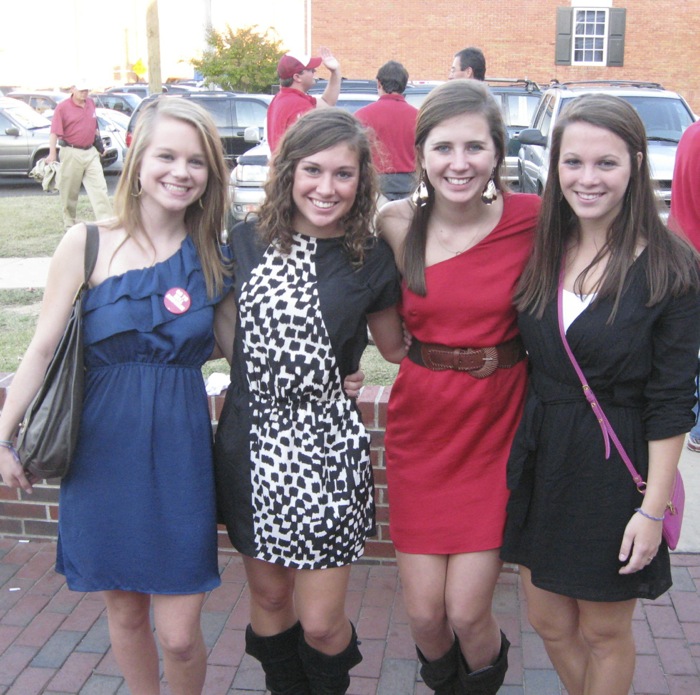 You never know who you will meet at an Away Game Tailgate.  Myra sent many great recipes, with 2 featured on my website under Alabama Signature Recipes.

Myra and I have stayed in touch.  I was very concerned about them after devastating tornadoes stormed through Alabama.  I was so surprised one day almost 2 years later when a package from Myra appeared on my doorstep.  She had visited Tennessee and couldn’t resist buying an orange and white checkerboard tailgating bag.

For her Tennessee buddy!

Watch for upcoming stories from my tailgating travels.  I welcome your comments, recipes and any inside information on your favorite tailgating spots.