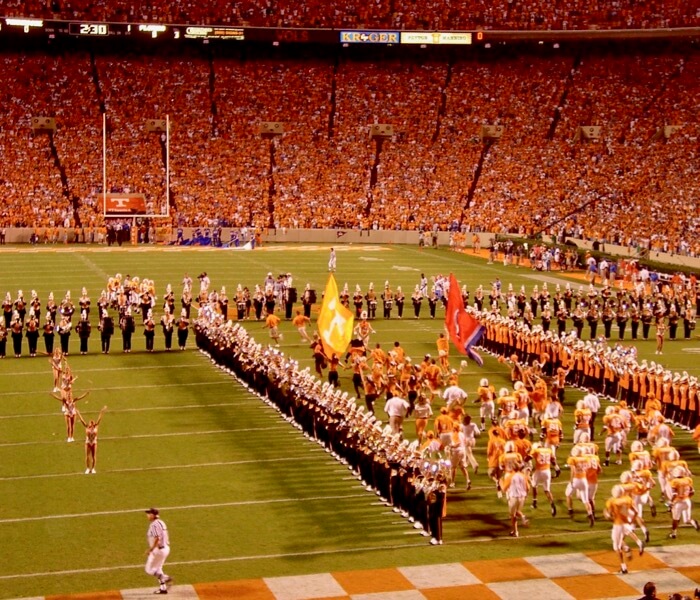 Last night the Tennessee Volunteer nation lost a great one.  John Ward, the legendary longtime “Voice of the Vols”  passed away.   The Vol Network announced the news in a statement Wednesday evening.  He was 88 years old. “It is with a heavy heart that we announce a great voice has gone silent.  Mr. John Ward, legendary advertising executive, and one of the most beloved broadcasters and ambassadors for the University of Tennessee, passed away this evening.”

Family, friends and fans will be remembering his legendary voice, energy and passion for the Vols.

When I first started KathyMillerTime website, my bio page mentioned John Ward, his famous play-by-play calling of Tennessee football and basketball games.  Here’s how I described my Tennessee Vol roots…

“Growing up in Knoxville was like growing up in a world where the color wheel only had two colors: orange and white. Although my father graduated from the University of South Carolina, there was no chance of me becoming a Gamecock fan. I was destined to become a Tennessee Volunteer. My two sisters and I spent our childhood listening to radio sportscaster, John Ward’s play-by-play calling of the Tennessee games. John would say, “It’s football time in Tennessee”, and everything else stopped. I felt cold chills from head to toe when John exclaimed,”Give him 6! Touchdown Tennessee!”

Driving across the Henley Street Bridge on crisp, fall Saturdays, looking at Neyland Stadium, hearing the roars and cheers echoing from the sold out crowds, I couldn’t help but think, “I can’t wait to go to school at Tennessee.” And go I did. All of my UT experiences were memorable, but ranking at the top was a Saturday football game with 100,000 plus fans wearing orange and white, singing Rocky Top.”

In an era of numerous football games being televised every gameday, we may forget how important the radio was to visualizing the action on the field.  Unless you were at the game, you tuned in to your local college radio network, listened to the play by play and color from fabulous radio voices.

When John Ward retired from announcing the Volunteer games, Kenny Chesney wrote and performed this song…  “Touchdown Tennessee”  I love this tribute…

As Kenny Chesney so aptly put it “Your voice was our eyes and we could see, Touchdown Tennessee”.

Thanks for so many wonderful memories John Ward.

“Give him 6…Touchdown Tennessee!”