IN THE KITCHEN WITH JOHN AND…

IN THE KITCHEN WITH JOHN AND BARBARA HOPKINS

IN THE KITCHEN WITH JOHN AND BARBARA HOPKINS 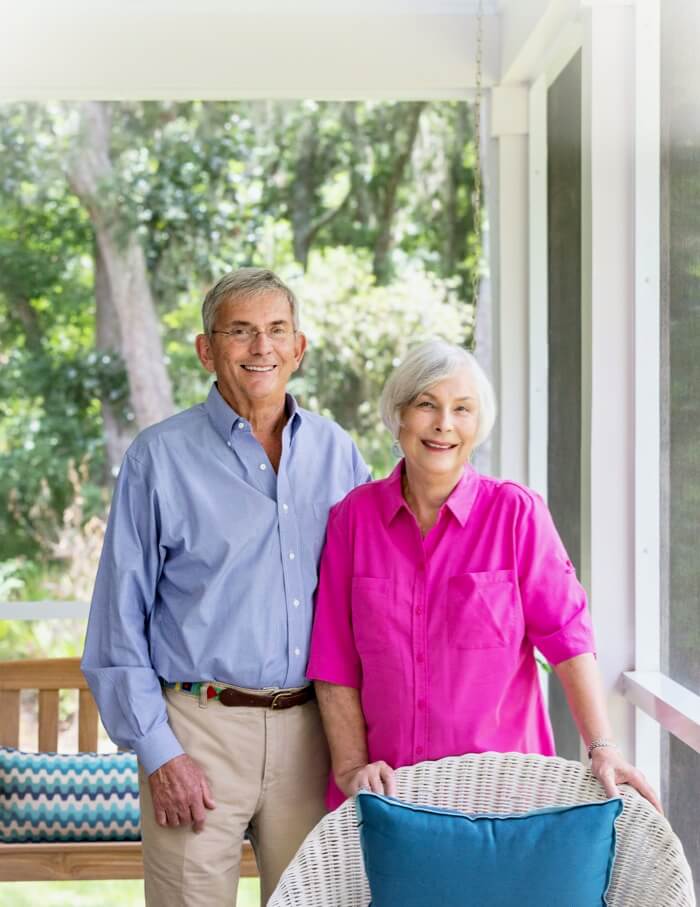 John and Barbara Hopkins have a long history of cooking together,  beginning when they were undergraduates at The University of Georgia.  Barbara’s undergraduate degree is in art and education.  Additional degrees include gifted, and administration…4 multiple  degrees.   Barbara says,  “I have been very fortunate.  I have had the opportunity to be a stay at home mom, an art teacher, a gifted program teacher/founder, and a school principal .” …all while keeping up with her painting.  She loves to paint in watercolor, but also has worked in pastels, charcoal, oil and acrylic.

John began as a math major, but switched to accounting. He worked with Arthur Anderson in Atlanta until they moved to his hometown of Waycross, Ga, where he worked with a regional accounting firm.  Later they relocated back to Atlanta with John working as a CPA and investment banker, organizing and operating banks.

John and Barbara’s skills make a perfect marriage of the Left Side/Right Side of the Brain.

John has plenty of the left side of the brain’s math, science and organizational skills, using these in his woodworking, including building boats, and framing and matting all of Barbara’s artwork.  Barbara uses her right side when creating her artwork.  They both love to cook and since cooking is an ART and a SCIENCE, both sides of the brain are in action. They work as a team.

When John and Barbara moved full-time to The Plantation on Amelia Island, they built a house designed around their loves and interests.  They chose a coastal cottage style prevalent in New England, but southern in its adaptability. Some of the details include  a Swoopy roof over the entrance, a vaulted ceiling with eyebrow windows in the living room, and dormer windows over the garage.  The living room is somewhat open to the kitchen…somewhat meaning as Barbara says, “you have to have walls.  Walls for that special antique and of course walls for paintings and original artwork!”.  They worked hand in hand with architect, Randy Rice; contractor, Steve Pickett, Pickett Construction and  interior designer, Julie Johnson, Julia Hall Interiors.

Now let’s talk In The Kitchen!

John and Barbara designed their kitchen after their lake house in Atlanta, making it larger and perfect for their joint cooking forays.  The kitchen is a magnificent showplace as well as work space!  The 2 things that stood out in my mind when I first saw it…the large wood-topped island running through the center of the kitchen and the bank of windows spanning the entire length of the kitchen over granite countertops and multiple under counter drawers. 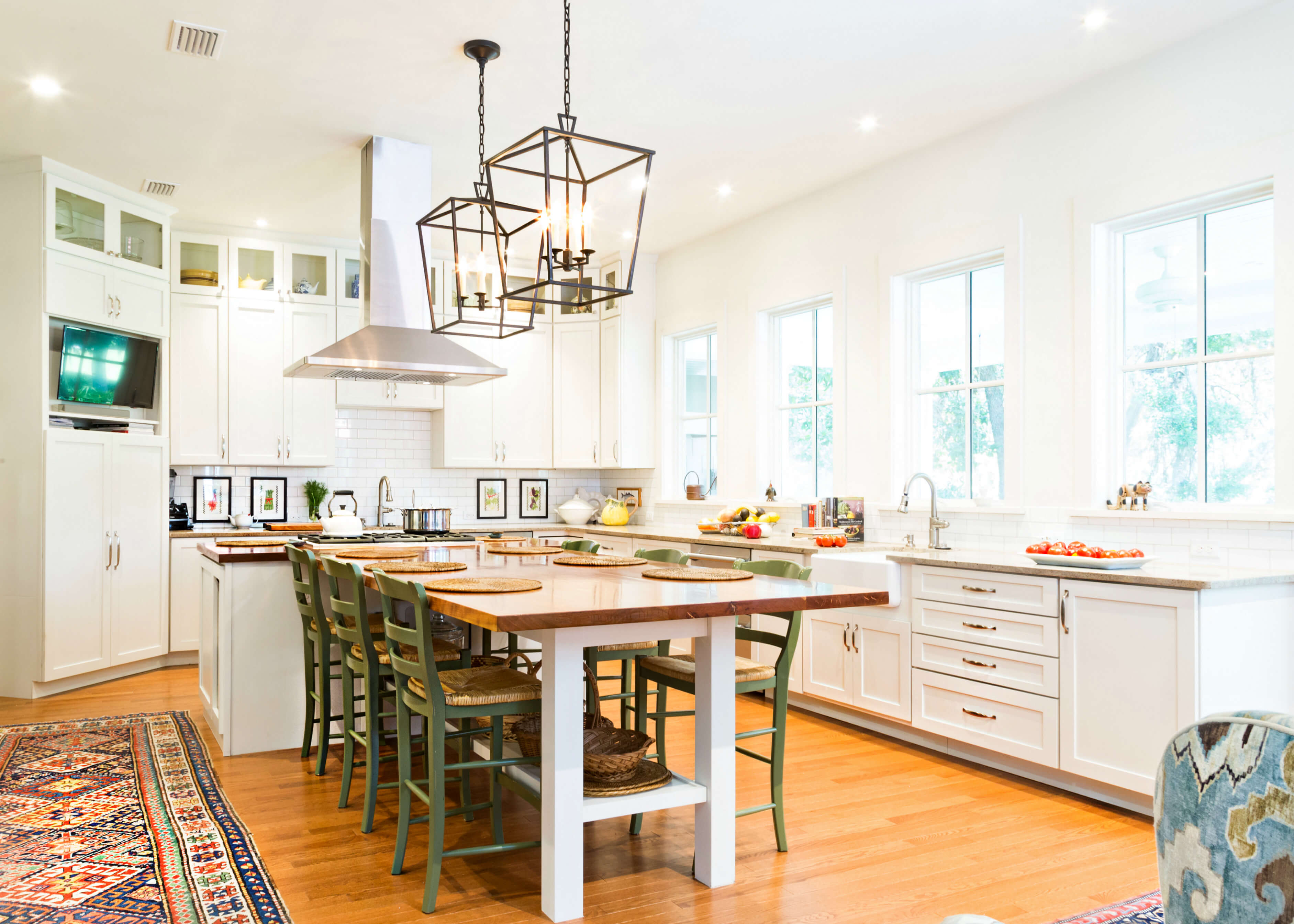 I love how pro photographer Susan Scarborough applies a trending photography  technique with a blurred John in the background! 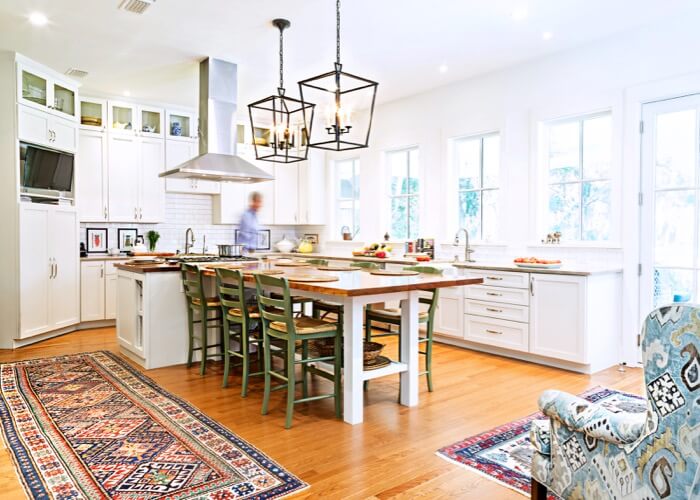 The bank of windows face the screened porch and golf course view.   This entire span includes  a large prep sink for making salads and an under-the-counter 2 drawer refrigerator, used to store salad ingredients and fresh vegetables. The end of the kitchen has another large sink dedicated to prepping the meats and fish…and clean up.  Both John and Barbara can be in the kitchen doing their thing at the same time.

The island, the main centerpiece of the kitchen, has a beautiful cherry wood countertop  made from a cherry slab John found in Glenville, Ga.  John did the actual finishing, as he has used these skills with his boat building.  The cooktop is centered on the island at one end opposite the back wall.  The cherry top is in a t-squared shape with extra counter on each side of the cooktop.

The island  is wide and can seat 10 utilizing both sides.  The Hopkins like to entertain around their cooking and many times everyone ends up in the kitchen.

John is the grill master of the family, grilling all kinds of fish and meats.  His smoker is also put to good use with ribs, pork butt, chicken and turkey..the grilling and smoking.

He always starts with a CLEAN grill… his tip, Use a wire brush to scrape/clean the grill.  Then brush with a paper towel dipped in olive oil.  Follow up with a rub of lemon half over the grill surface.  Barbara is the master salad maker and baker, using her side of the kitchen with the prep sink and handy refrigerated drawers.

John and Barbara believe in healthy eating.  ”Fit For Life” by Harvey and Marilyn Diamond, an early 80’s low carb cookbook, influenced their eating habits.  They adhere to a no salt diet and adapt recipes accordingly.  They also eat real food….fresh tomatoes, fresh fruits, healthy oils such as olive oil.  They love traditional Southern fare, but now try to adapt those recipes to their new healthy regimen.

One of their favorite recipes?  Summer Tomato Soup and the Soup’s on! 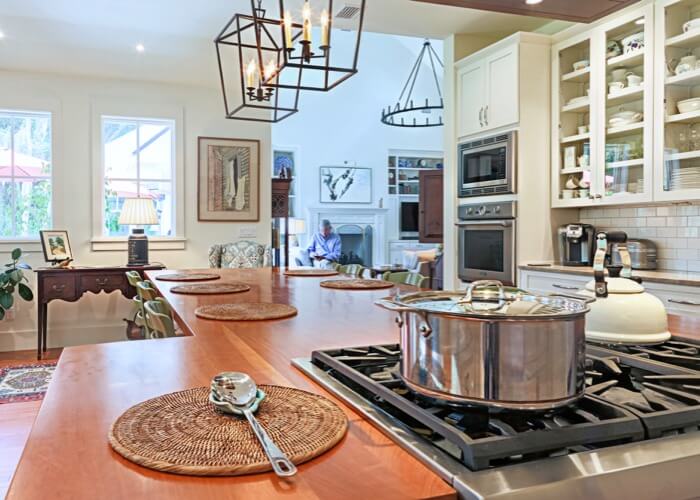 John made his summer tomato soup with fresh Grainger County, Tennessee tomatoes.  Many of you have heard about Grainger County tomatoes…their flavor is unique due to the Tennessee soil in this east Tennessee County…

John makes this soup without salt, garnishing with the fine fennel fronds. The cube of feta in the bottom of the bowl is a must! 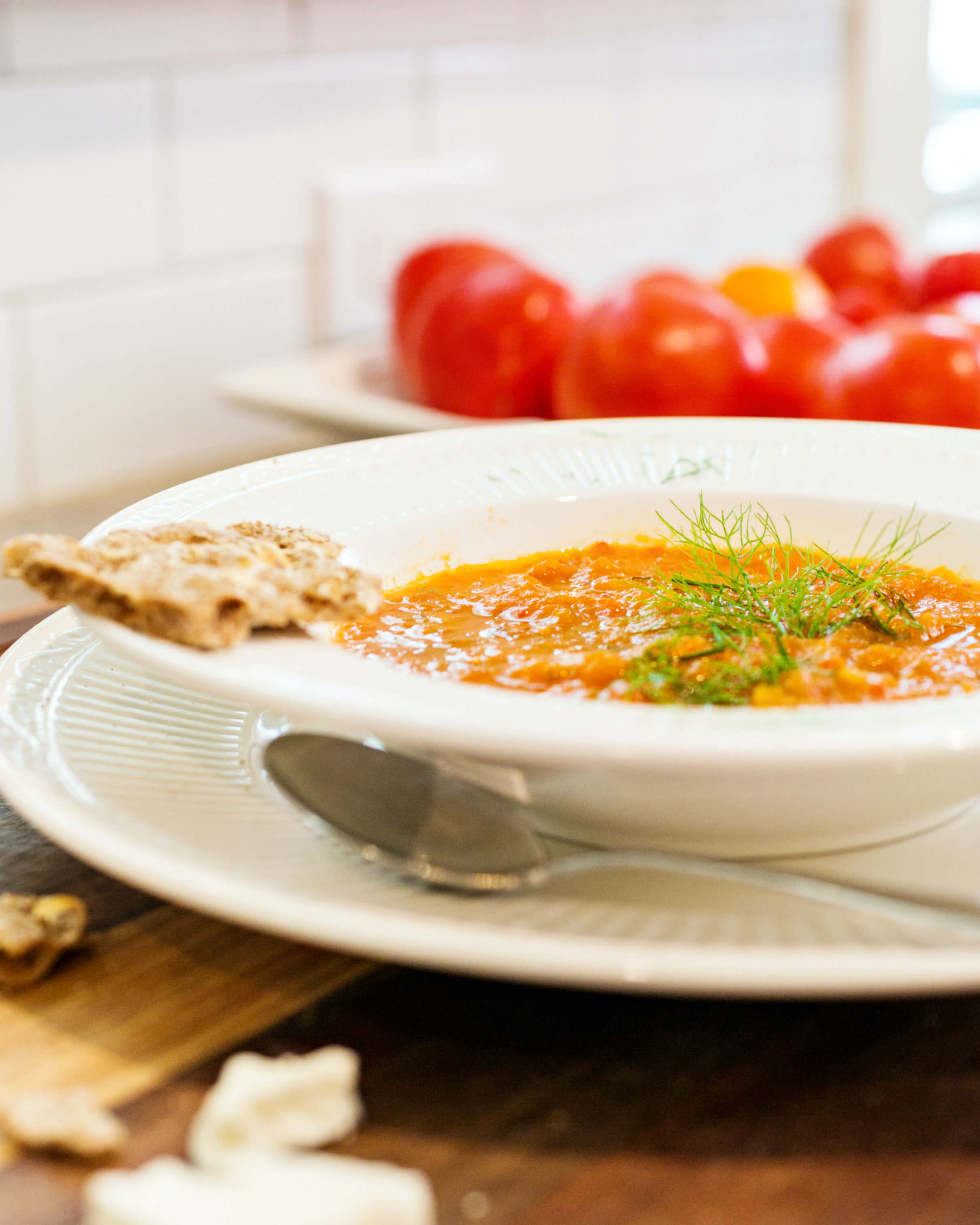 John Hopkins...why we love this recipe:  It tastes great!  You'll swear it's loaded with the cream usually found in tomato soup.  We like to make it all natural and salt free.  It is very healthy, freezes well, and can be doubled or tripled to provide continued pleasure throughout the year! Special tips:  We change by using Campari tomatoes when home grown not available.  I also sometimes, leave out the broth and tomato paste, blanch the tomatoes, remove skin and chop retaining the juice and seeds.  This way I know it is all natural and still has enough liquid.  Other times I leave out the fennel bulb and add a red bell pepper.  We then call it Roasted Red Pepper Tomato Soup

John loves a good Low Country Boil and Oyster Roasts.  At a recent party for their architect, John and Barbara prepared a Low Country Boil.  Appetizers were served in Barbara’s art studio (another story for another time) and drinks were served from their butler pantry, wine cooler area.  For dinner, 10 were seated around the island, 8 in the dining room and 12 in the studio. 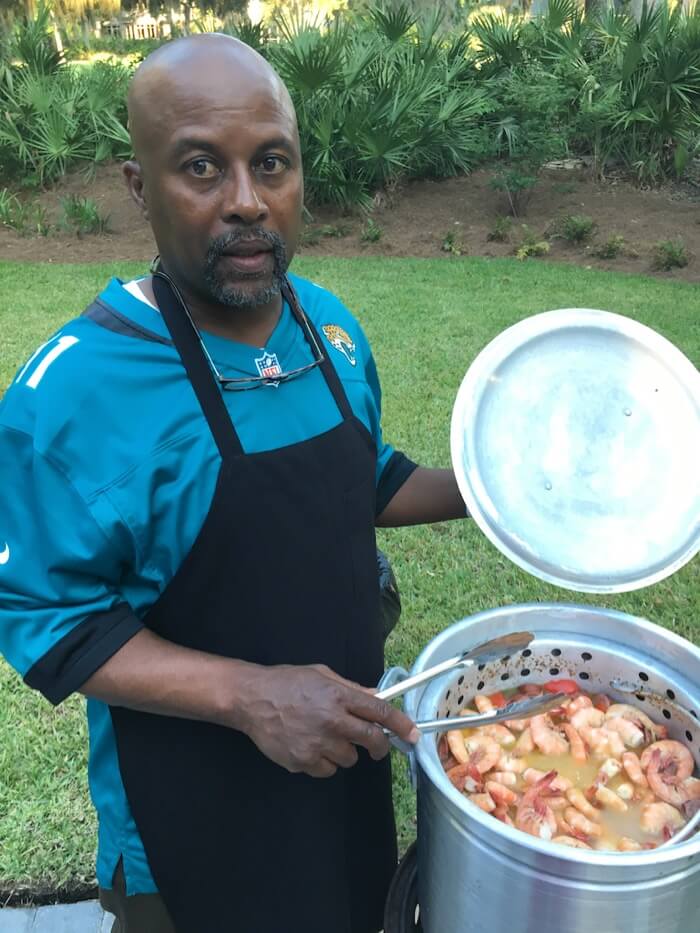 John and Barbara’s love of cooking and entertaining shines through…and supervising it all? BELLA! 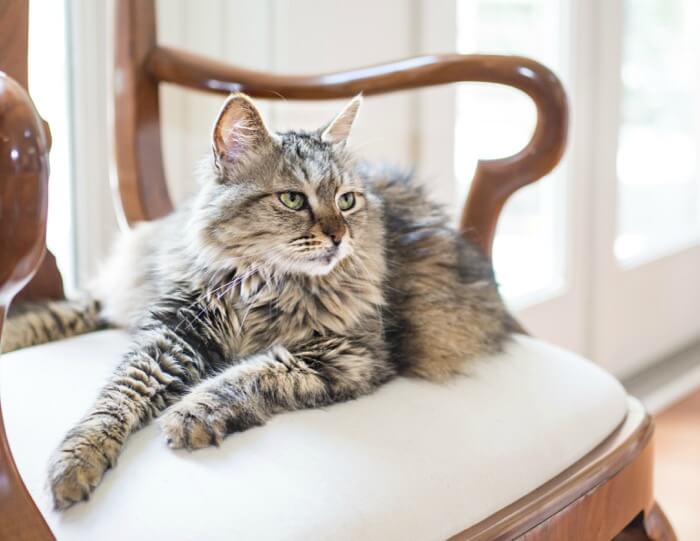 Thank you John and Barbara and you, our readers, for joining us In The Kitchen!  Please let us know what you think and who we should feature.  Do you know someone who loves to cook?  Tell us. And just because we are talking In The Kitchen doesn’t mean you have to have a newly remodeled kitchen. You might like to tell us about your dining spots…or a family story about how you learned to cook.  Or share a few favorite recipes. Let us hear from you.  We’d love to know your specialty!

All photos courtesy of Susan Scarborough.  One of my great photography partners!

Come Celebrate with me!  I’ll save you a seat at the table.

What could be more French than painting and fabulous food?  Several Amelia... continue reading