GAME OF THE CENTURY? PLEASE…BUT #5…

Home » The Art of Living » Tailgating & Homegating » GAME OF THE CENTURY? PLEASE…BUT #5 LSU vs #7 FLORIDA SHOULD BE A DOOZY

GAME OF THE CENTURY? PLEASE…BUT #5 LSU vs #7 FLORIDA SHOULD BE A DOOZY

Posted on: October 9, 2019
The Art of: Tailgating & Homegating
Tags: blackened alligator, Florida, LSU, SEC, tailgating on the Bayou, tailgating through the south, The Chimes,

I got an email from friend and sports editor of USA Today, Tommie O’Toole with the most stats I have ever seen about a game….written for the LSU faithful…the game of the century?  There were more stats than I could possibly comprehend showing how LSU will win over Florida in Death Valley in Baton Rouge on Sat. Oct 12, 2019 at 8:00.  LSU loves night games and as you can imagine it will be LOUD!

James and his friends are making the trek to New Orleans and then on to Baton Rouge for the game.

This brings back many memories of our Tailgating travels…the year (2013) we went to the LSU/FL game in Baton Rouge.  Thought you would enjoy and also get a feeling of the LSU game day experience, along with some LSU/FL tailgating recipes!  THIS WAS THE YEAR I STARTED MY WEBSITE AND BLOG…

TAILGATING ON THE BAYOU…ON THE ROAD AGAIN

For those of you new to my tailgating travels,

Kathy Miller Time’s “TAILGATING THROUGH THE SOUTH” painting series celebrates the special traditions and unique tailgating spots of each of the 14 Southeastern Conference schools. I have traveled through the SEC gathering recipes from fans and alums, taking hundreds of photographs of tailgates and landmark buildings, then capturing these experiences into compositions that celebrate each school’s uniqueness.  Every painting includes a tailgate.  The paintings are meant to elicit an emotional response from that school’s fans.

ON THE ROAD AGAIN!

After a brief stopover in Gainesville, Dave,Vern and I began our first real roadie.  We headed to the LSU / Florida game in Baton Rouge. First stop, Biloxi, Mississippi and the Beau Rivage.  It is a long way to NOLA and we needed a stopping point. We  remembered Glo and placed a few bets in her favorite casino. 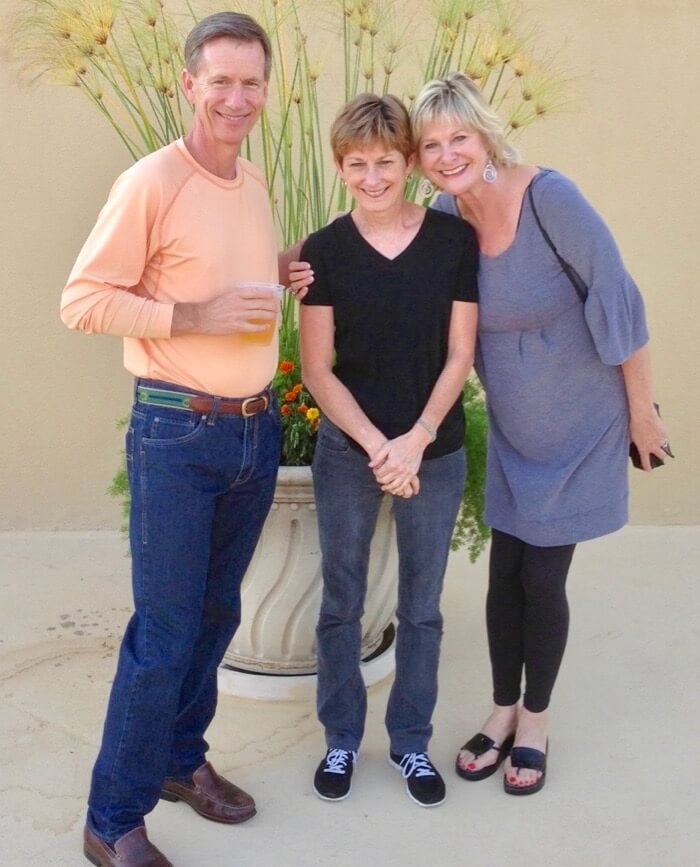 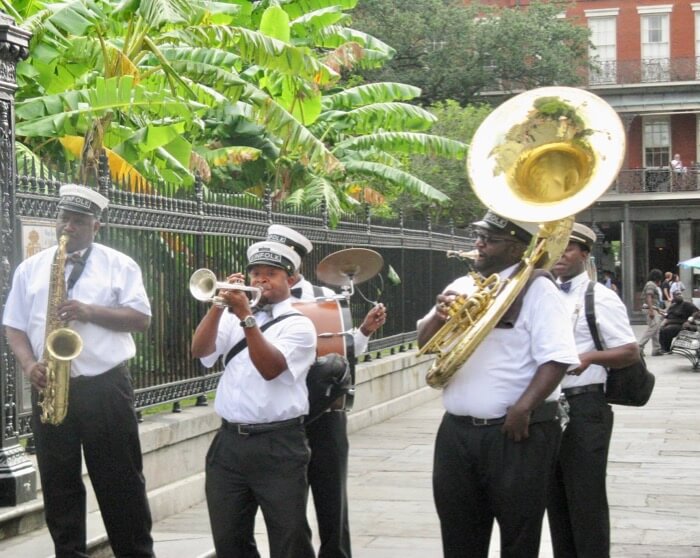 I imagine New Orleans is the Friday night stop for most fans before an LSU game in Baton Rouge.  We saw plenty of Gators and even had a parade with a blow up Al, the Gator mascot. 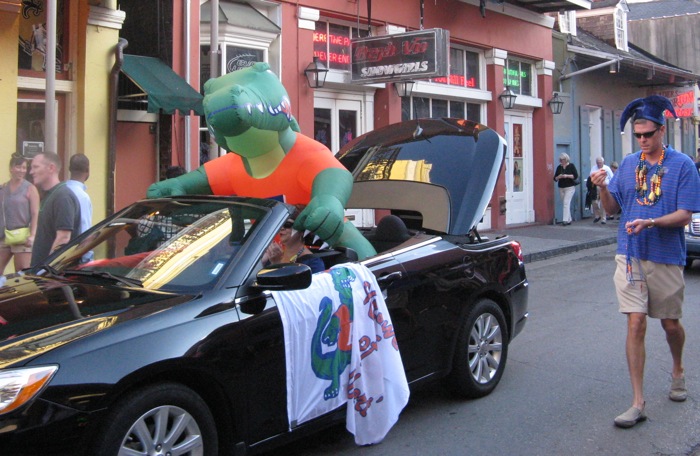 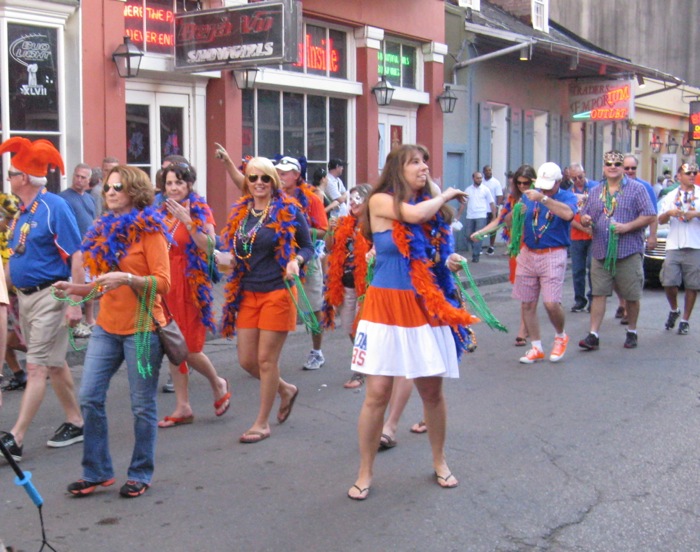 Dinner was celebrated at Galatoire’s, on Bourbon Street. 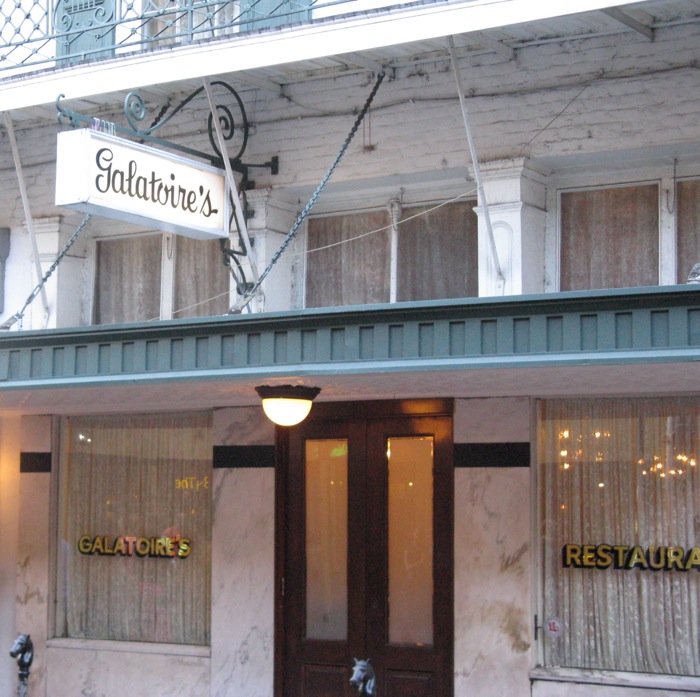 Such a festive atmosphere with wonderful redfish, and crab entrees. 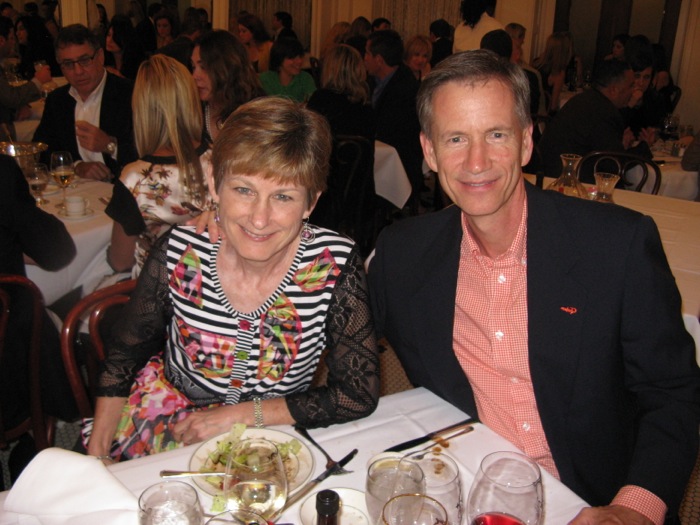 Bright and early Saturday morning  was travel time.  Destination, Baton Rouge and Tiger Stadium.  After arriving at our parking spot on campus we walked to the WWI Memorial Tower  in the center of the LSU campus.  The inspiration for my “Tailgating On The Bayou” painting, I couldn’t wait to see the Parade Grounds filled with tailgating Tigers. 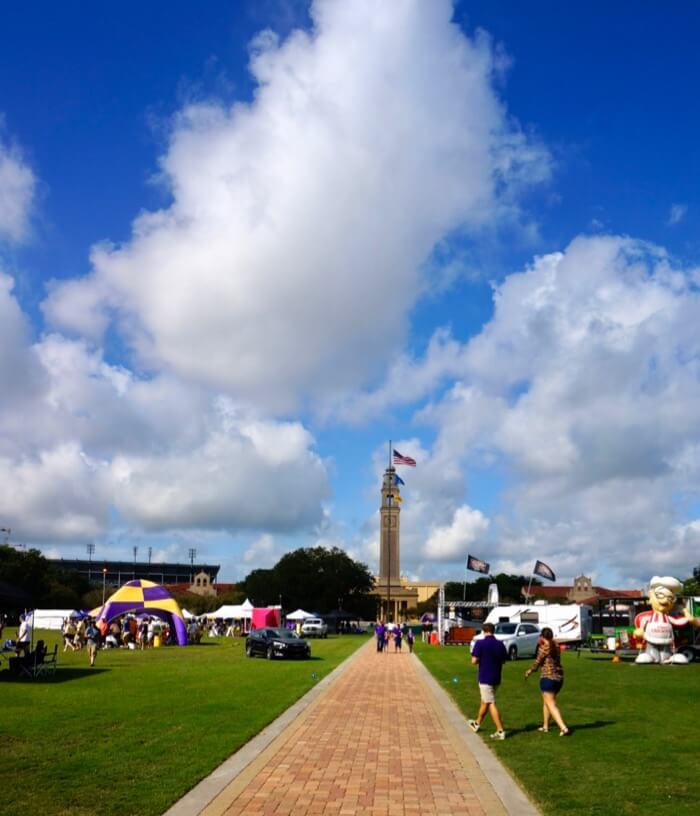 “Tailgating On The Bayou”   painting by Kathy Miller features the Tower, the outer Quad buildings and Tiger Stadium. 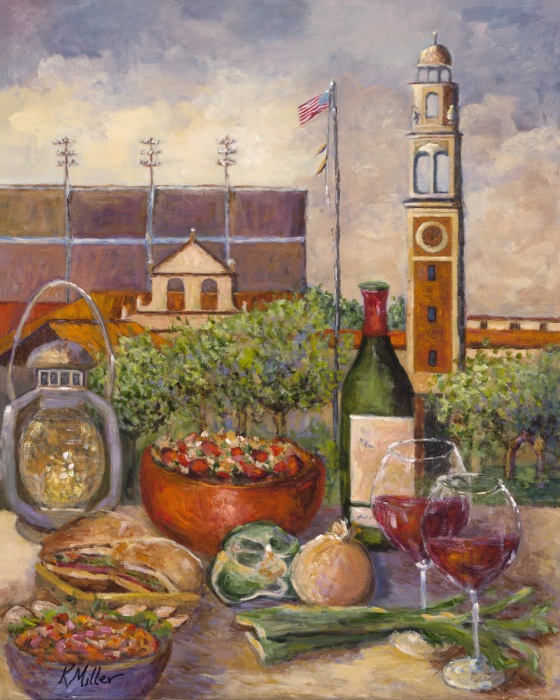 The tailgate includes “The Trinity”, onion, green pepper and celery.

The recipes include some of the most famous Louisiana cuisine, jambalaya, muffalettas, crawfish, gumbo and blackened alligator, (this recipe from the famous The Chimes).

This Blackened Alligator was delicious!  We all know about Florida and Gators, but there are quite a few gators in Louisiana and I’m including a crazy recipe from The Chimes Restaurant in Baton Rouge, La. home of LSU.  A server at the Chimes gave the recipe to me.  Remember this is a BULK recipe.  The Chimes must serve hundreds per day.  Recipe at the end of post. 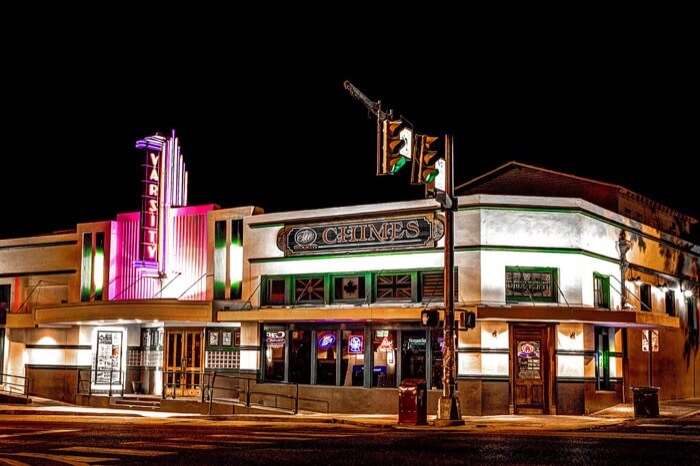 I always wear my Tennessee button and Gator Mom button and continued the tradition at LSU. 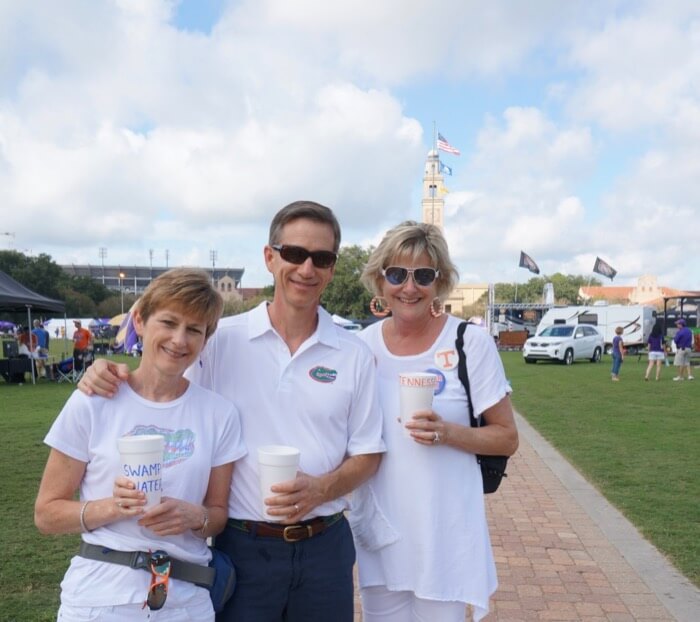 One fan was busy stirring a pot of Gator Picadillo.  I thought it was Jambalaya but he said “No Picadillo!”  This is a Cuban comfort food and my guess is he wanted to serve up some Gator tail ala Florida style. 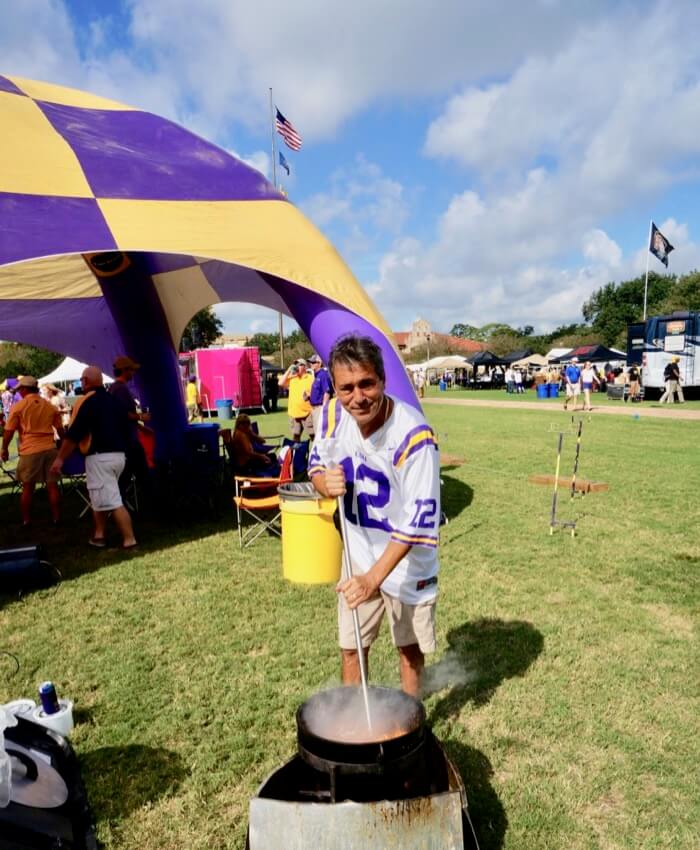 Tailgating in Louisiana is most unique.  Louisiana cuisine is so distinctive.  All schools have barbecue, hammies, slaw and all the usual fixings, but due to the Cajun and Creole influences, there is nothing like Louisiana cooking!  I will not try to give lessons on the differences between the two, but think French influence, as in Geaux Tigers.  The Trinity is involved in so many dishes, the Trinity being not the Father, the Son and the Holy Ghost, but onions, green peppers and celery.

Another Gator Tail on the Grill. 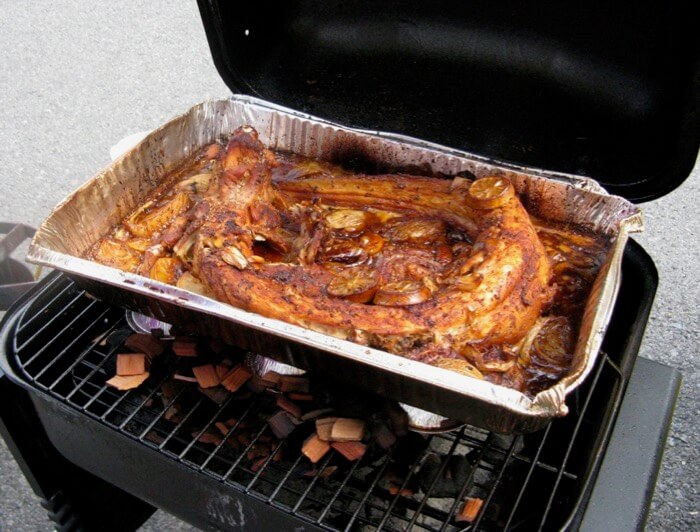 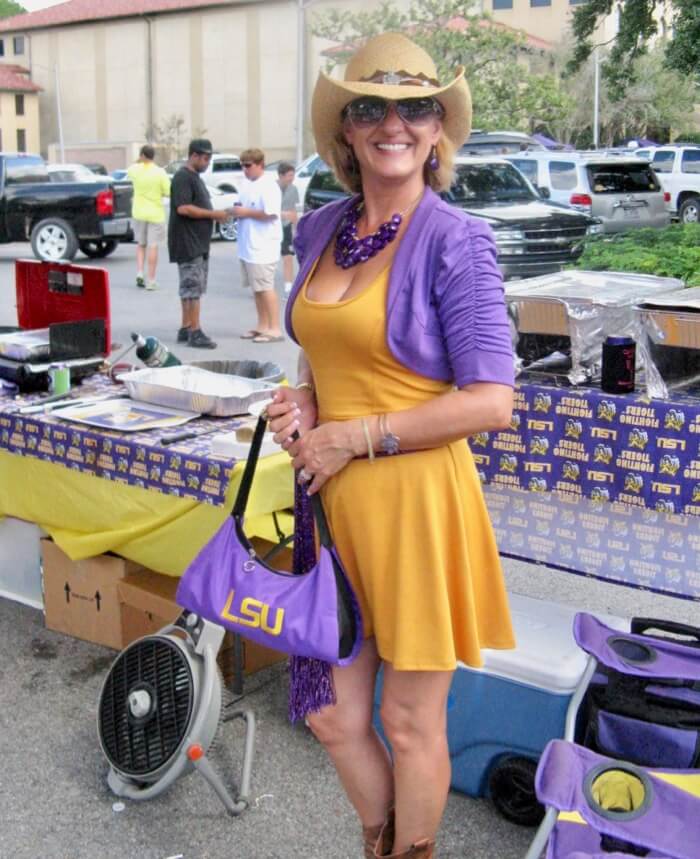 We had a great time walking the LSU campus and visiting  with LSU fans. It’s Miller Time with Tiffany and Michelle. They had fantastic tiger markings painted on their faces. I still keep up with them via Facebook. 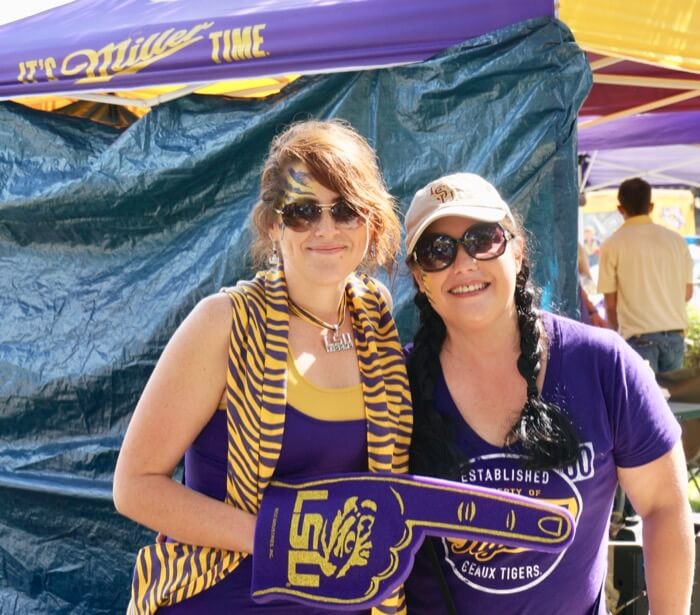 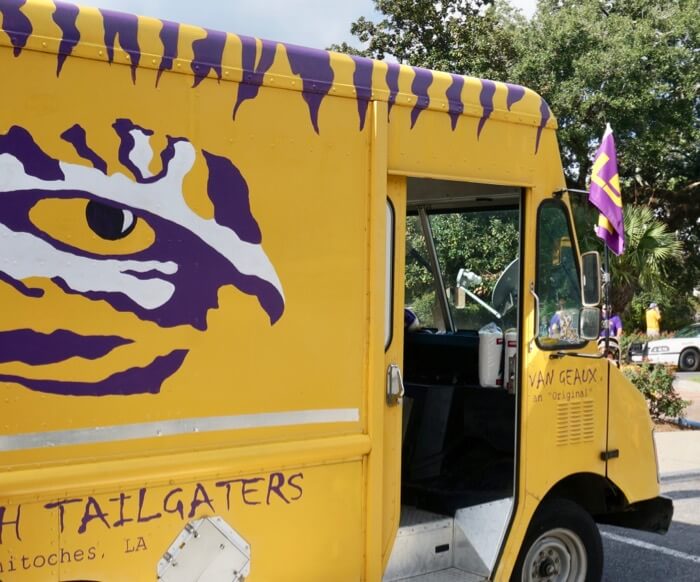 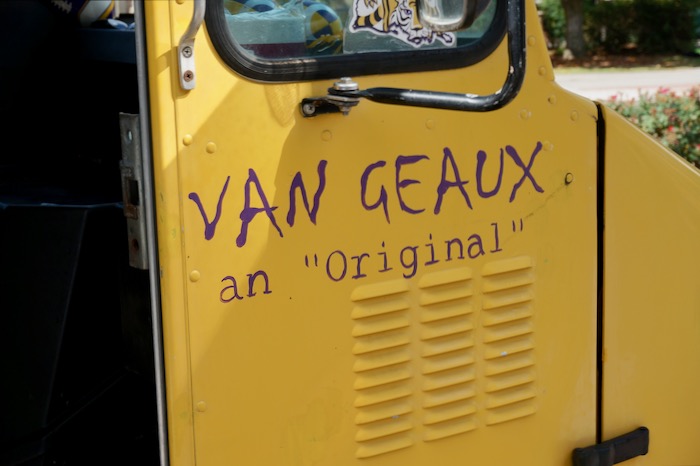 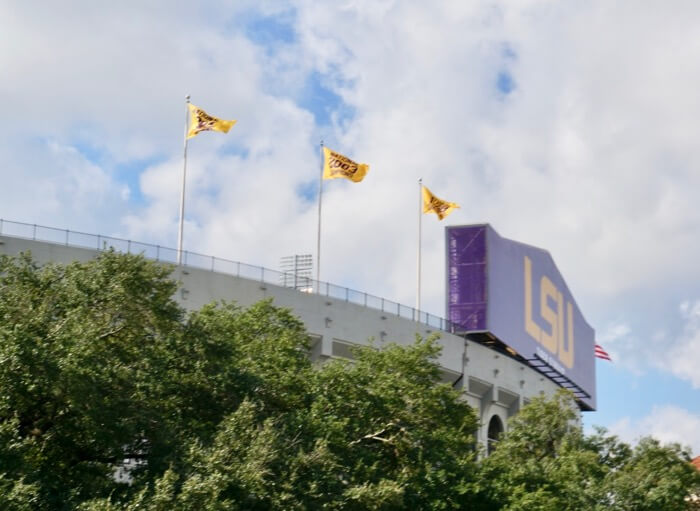 Mike the Tiger, LSU famed mascot has his own special habitat…right outside the stadium. 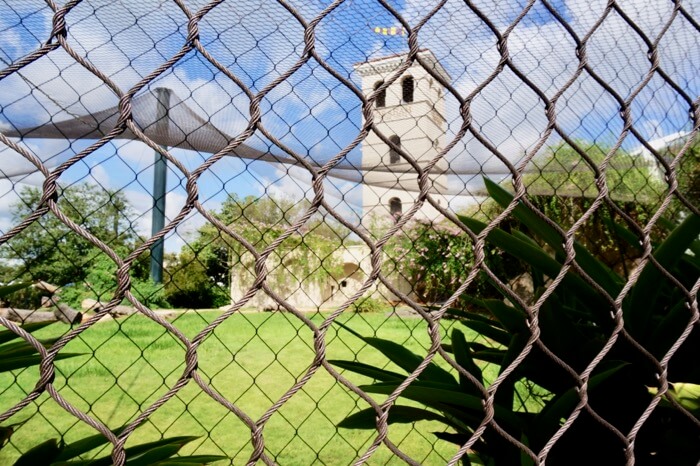 These Gator fans were chomping outside Tiger Stadium and Mike’s habitat. 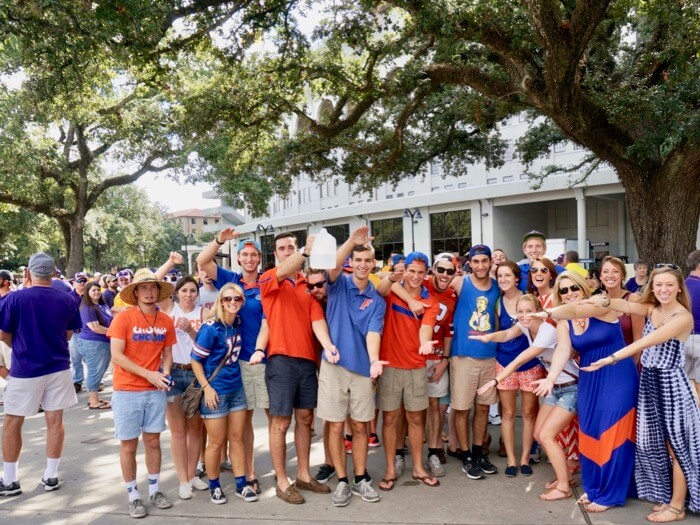 This LSU fan just ignored them and rode his tiger. 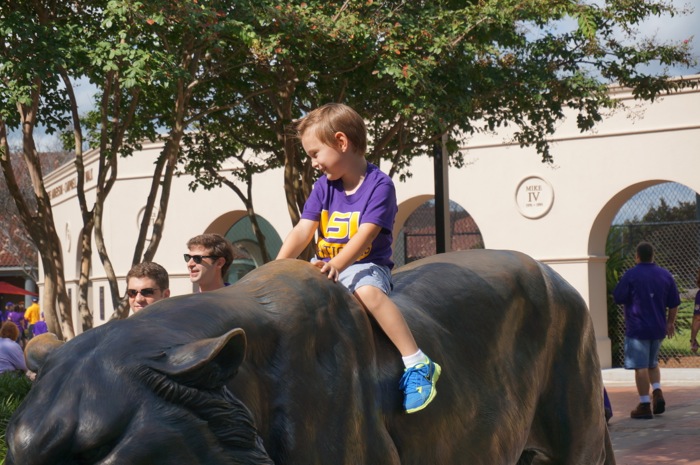 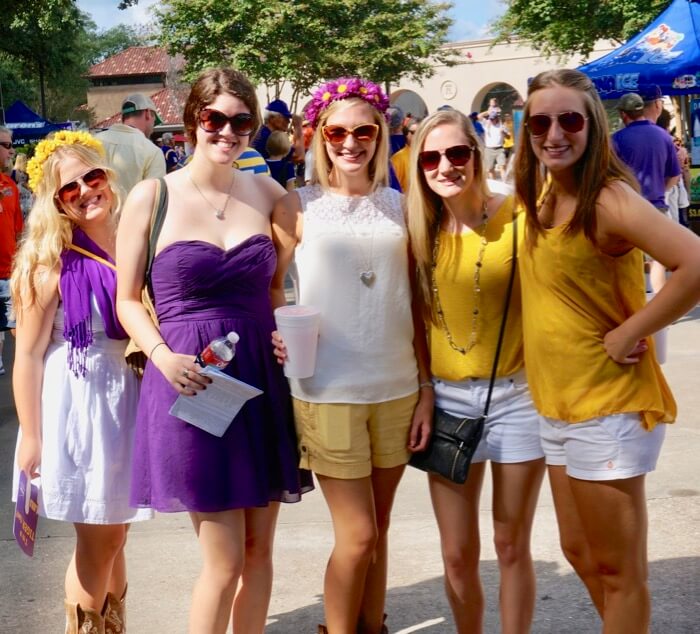 James and his friends came by bus from New Orleans to Baton Rouge.  The bus deposited them in the middle of LSU tailgating parties.  A wonderful group of LSU fans invited them to join their tailgate.  We made our way to their tailgate and met some of the nicest fans.

Billy Knoles, Nancy Anderson, Charla Durham and Brenda Knoles welcomed us with open arms.  Had the best time visiting with them and sharing tailgating stories.

Their tailgating food was delicious.  Billy and Brenda had made wonderful BBQ pulled pork sliders with gator tail added for flavor and a good story.  Also tasted the most delicious Boudin Balls.  These were similar to pigs in a blanket but with boudin sausage, spices and cheese.  Would love to have that recipe!

After all the wonderful hospitality I thanked Nancy, Charla and Brenda with my “Tailgating On The Bayou” cards. 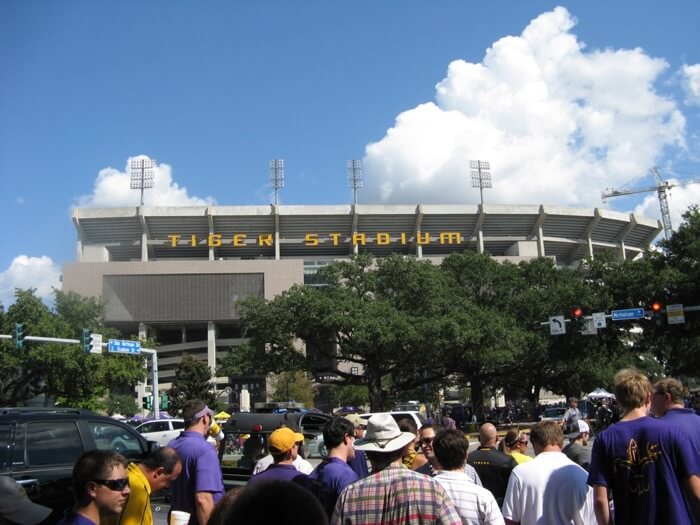 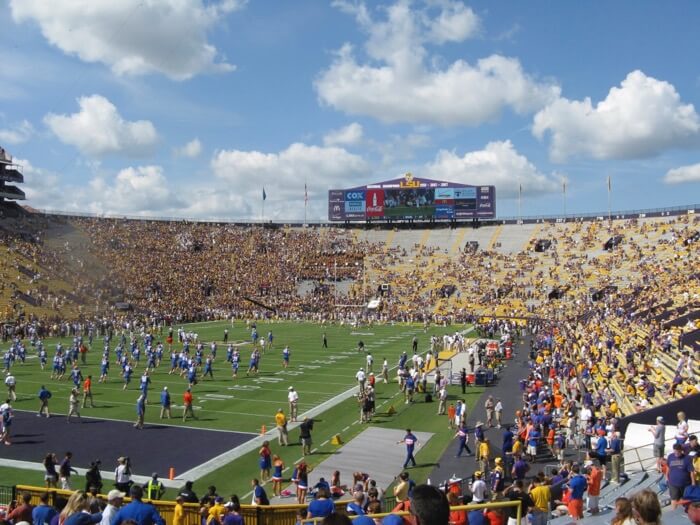 I always love the bands especially the drums. 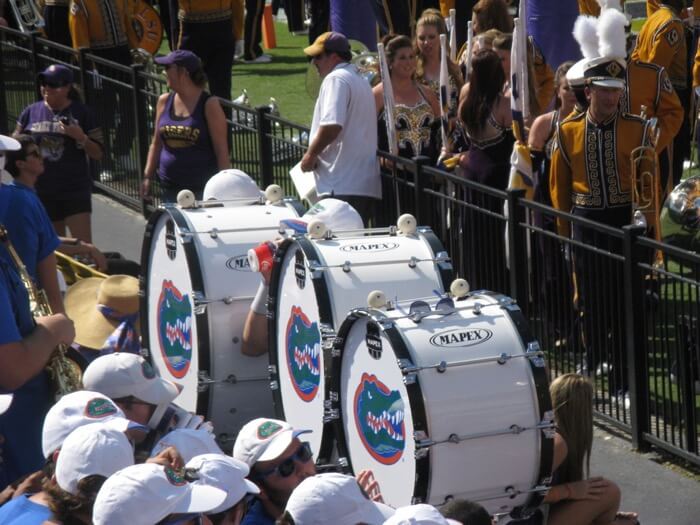 And LSU’s “Golden Band from Tigerland”

LSU has many wonderful traditions led by their band.  When the defense makes a great play such as a turnover or causes a 4th down, the band plays Chinese Bandits and the fans bow to the defense.  There are also cheers for each down.  The first down cheer is  a sequence from Hold That Tiger and the fans yell Geaux Tigers.  The second down cheer is a typical sequence with woo woo LSU.  The third down cheer is “Eye of the Tiger”.  I am impressed that they can keep up with all this. 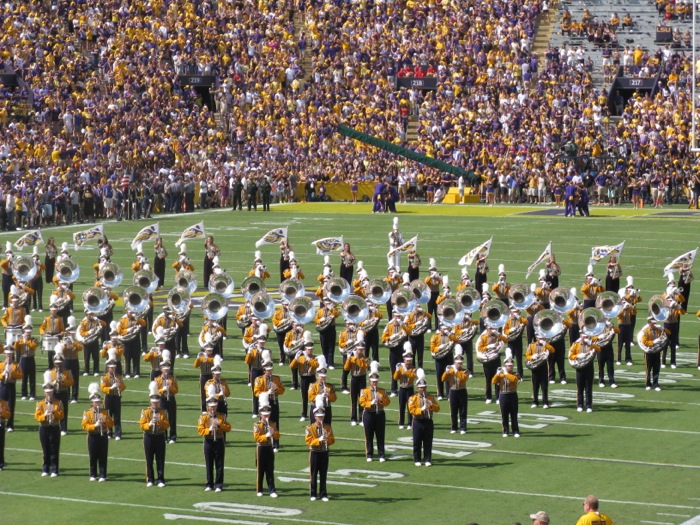 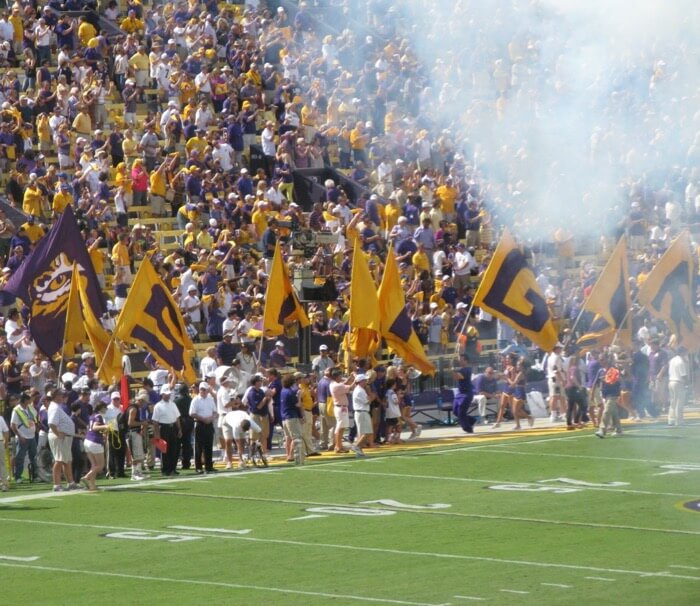 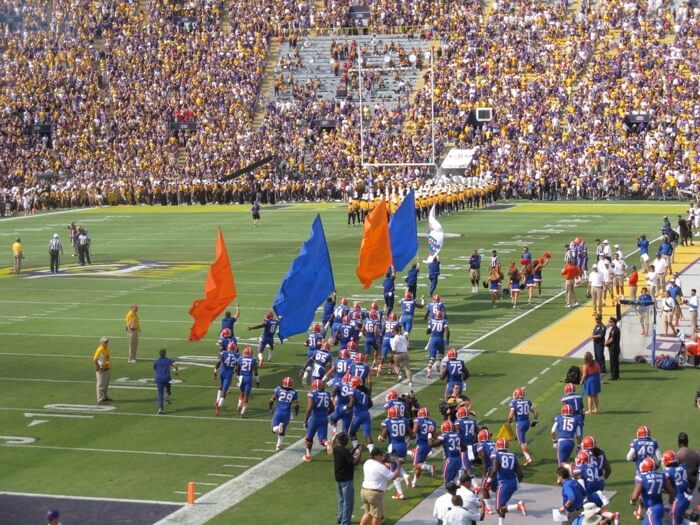 On a very hot, humid afternoon the Gators lost.  Even with a loss we all agreed the experience was tremendous.  Beautiful campus, great tailgating, fabulous food and wonderful Tiger fans.

It’s always Miller Time even on The Quad! 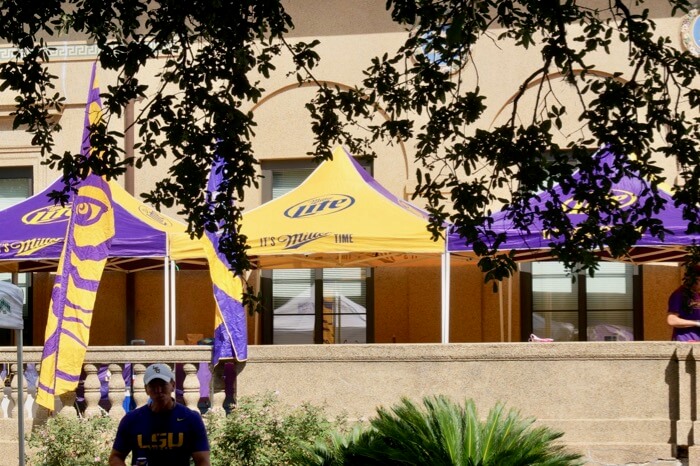 ESPN Gameday will be televised live on Saturday, Oct 12 from The Quad on LSU campus.

Since OCT 12 is James’ birthday, I know the perfect gift… A Gator victory over LSU in Death Valley.
They are ready after an exciting victory over Auburn at Ben Hill Griffin Stadium in Gainesville.

Kari (an Auburn alum), and Gators, Lizzy, Carrie and James. 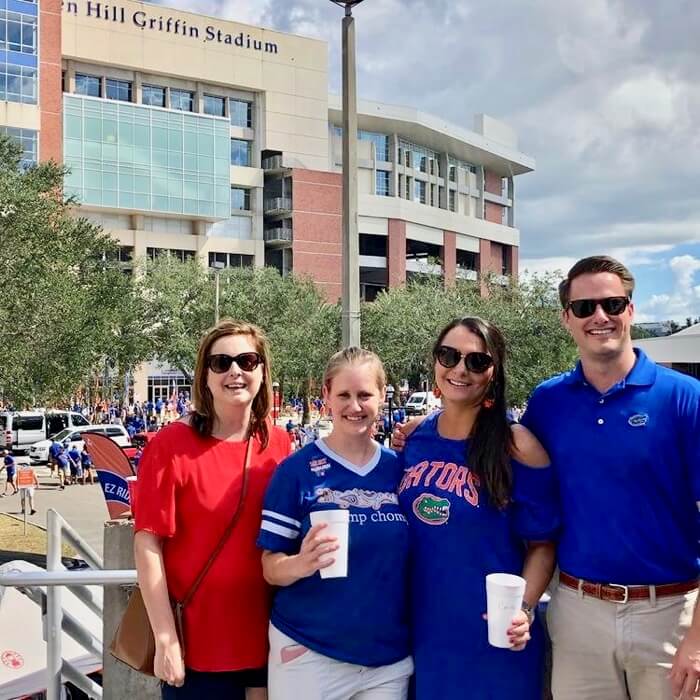 This recipe was given to me by The Chimes in Baton Rouge....Large restaurant sized portions.  Think you will be just fine mixing very small quantities of the spices and marinade.

By KathyMillerTime
The Chimes Restaurant in Baton Rouge

Watch for more reccipes from LSU…