FRIDAY NIGHT BEFORE AN OLE MISS…

I clearly remember the first time I heard about Ole Miss and tailgating in The Grove.  My son James, a sophomore at Florida at the time,  told me he was going to an away game at Ole Miss.  “I hear they have great tailgating.”  I responded with a smile and thought,  “it can’t be much better than tailgating at Tennessee or Florida.” 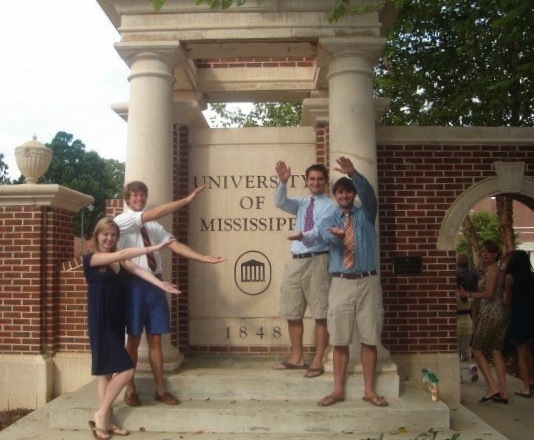 The texting began as soon as he hit Oxford.  He loved Oxford.  He and his fraternity brothers were welcomed at the Sigma Nu house and in The Grove.  James texted all kinds of accolades about the family atmosphere of The Grove.  He wanted me to experience tailgating in The Grove.

When I began this project in earnest, I knew a trip to Oxford and Ole Miss was a must.  My good friend, Joanne, suggested a road trip together for the Alabama/Ole Miss game.   She called her brother-in-law, Hank Burdine and asked if we could come to a game and tailgate in The Grove.  He said, “Sure, I’ll coordinate the tailgate with friends and you can stay with my sister.”

The first thing we saw when we got to campus on a beautiful Friday, October morning was The Grove, 10 acres of tree filled green space.   It was roped off, empty except for large red and blue garbage cans, just waiting for the stampede at 9:00 pm.  Rushing The Grove is tradition and thousands of fans storm The Grove on Friday night to stake out their tailgating spots.

We wandered the Ole Miss campus taking lots of pictures.

The Library, with an unexpected meeting of friends of a friend. 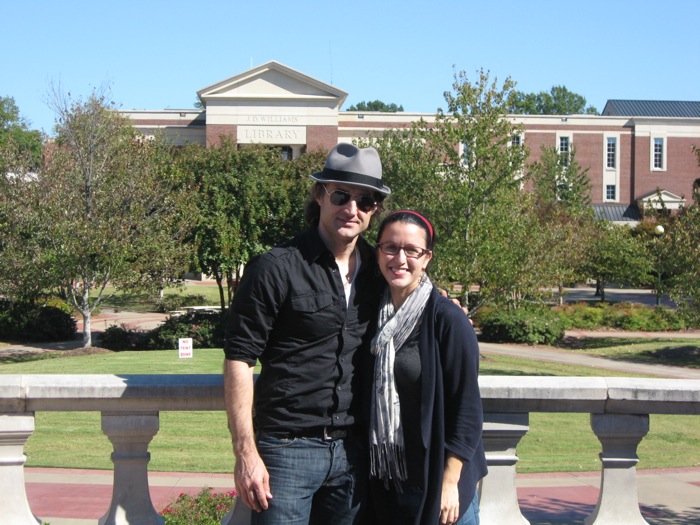 We walked The Square in Oxford and enjoyed all the sights and sounds.

The famous Oxford Courthouse On The Square 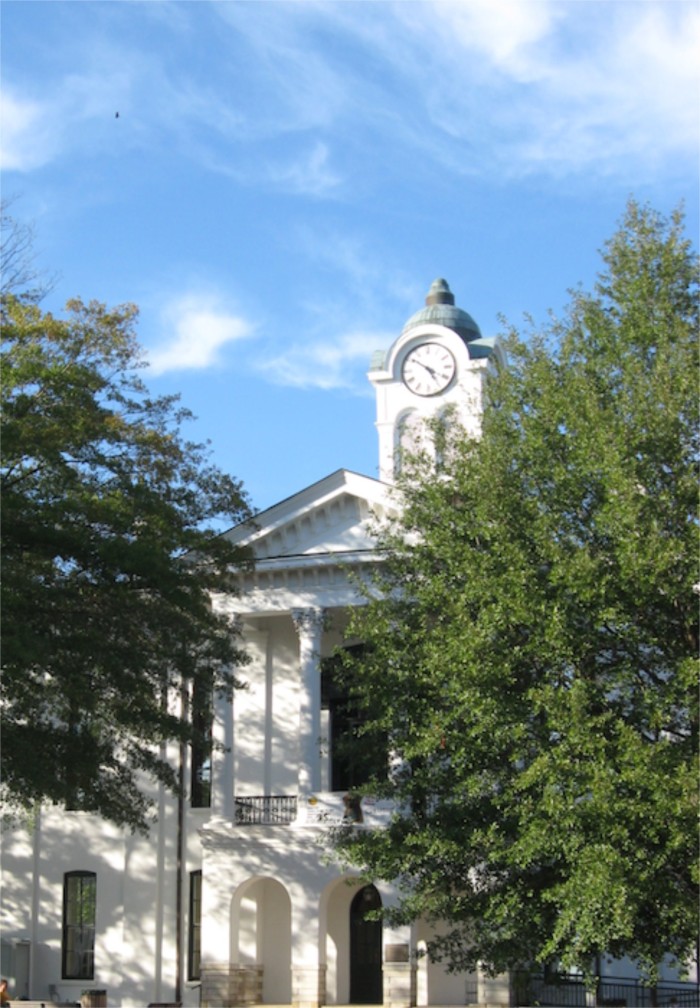 Square Books balcony overlooking the Oxford Courhouse.  One of my favorite bookstores! 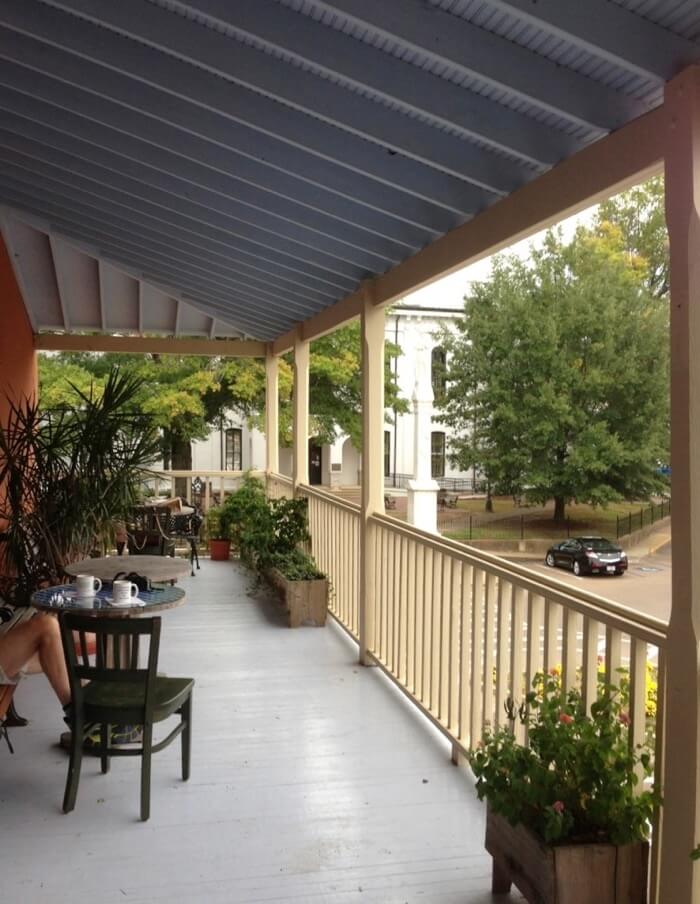 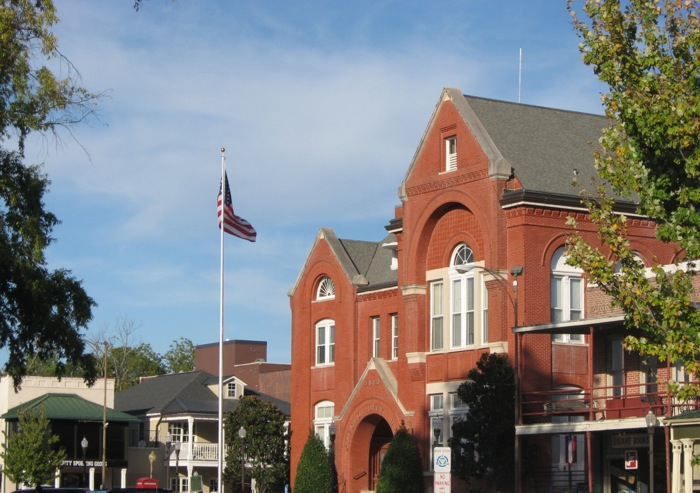 A red telephone booth sits on the Oxford Square, similar to British ones in London and Oxford, England. 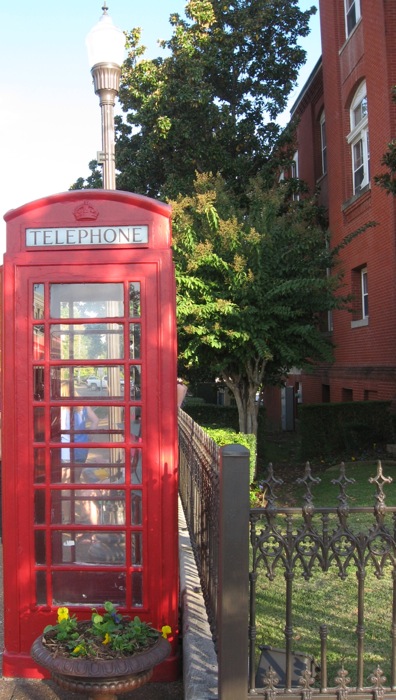 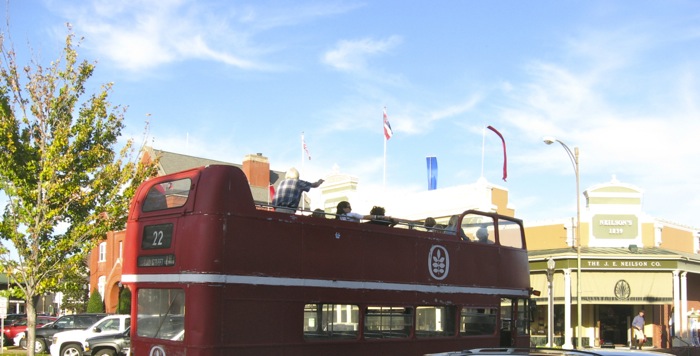 A red double decker bus is included in my “Tailgating In The Grove” painting. 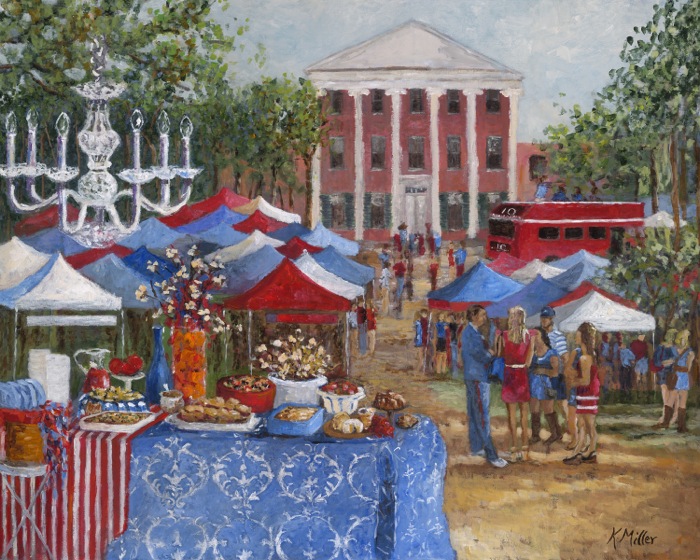 “Tailgating In The Grove”  prints make great gifts for the Ole Miss student or alum.

We told a friend we were staying with a relative in Taylor, Mississippi and she said, “You will have to eat at Taylor Grocery.  They have the best catfish dinners.  But get there early.  You will have to wait in line.  And by the way, I will be there with my family tonight. My brother is playing in the band.”

Taylor, Mississippi is 9 miles from Oxford.  Hank’s sister, Jane Rule lives in Taylor and provided us rooms for the weekend.  We had heard something about catfish and Taylor Grocery, but didn’t think much about it.  The road dead ended, we took a left turn and there sat the Taylor Grocery looking exactly like what it used to be, an old dry goods store. 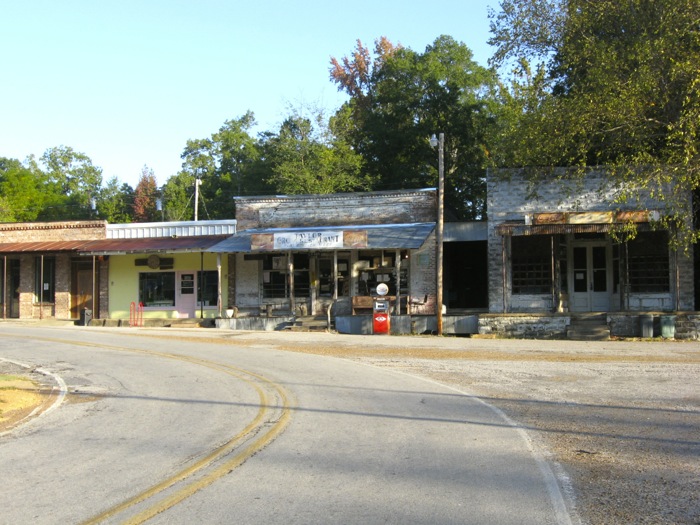 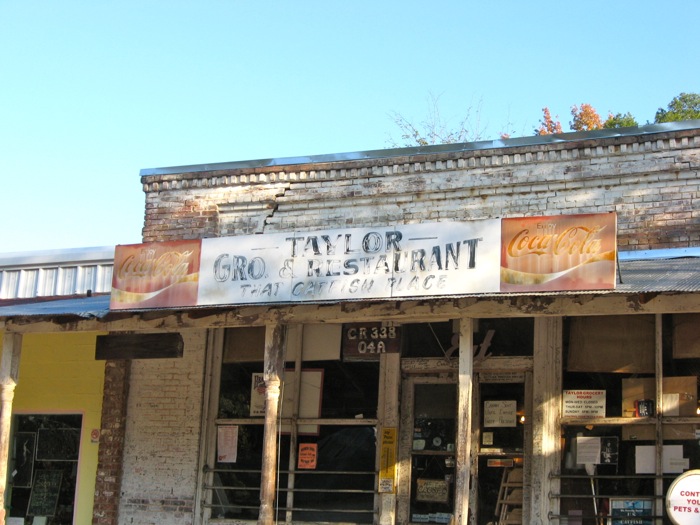 It was 5:30 and a line was already forming out the door.  Directly in front of Taylor Grocery, the road took a sharp dogleg right.  Two blocks later, across from the Taylor Methodist Church 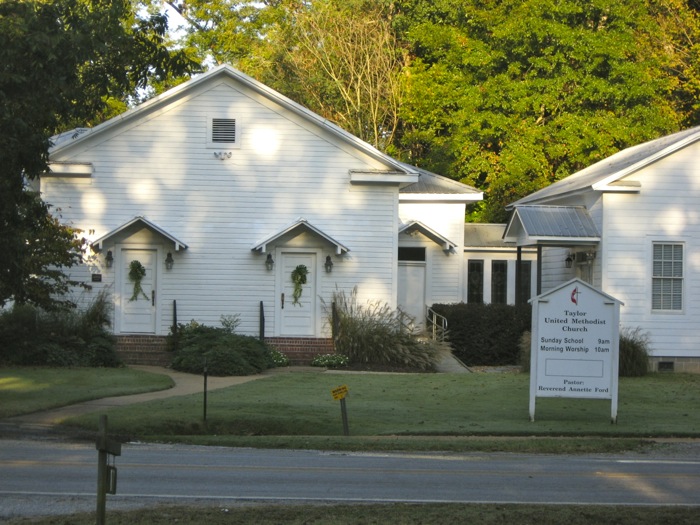 was our home for the weekend. 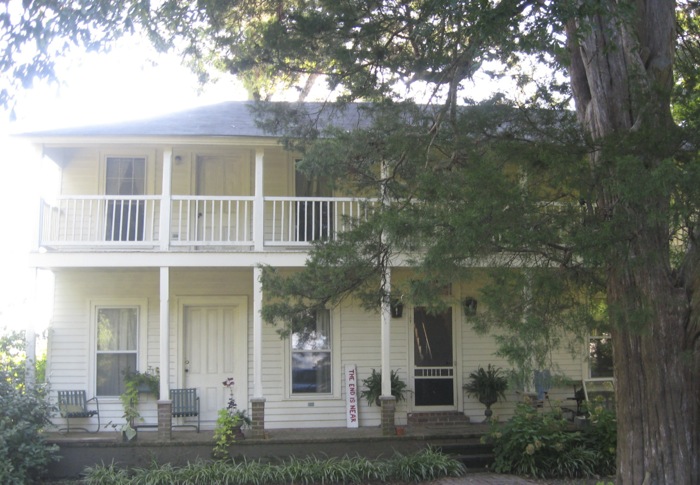 Jane Rule Burdine was our perfect host.  She lives in a lovely old home with the best wraparound back porch, overlooking gardens and a large cotton field.  After a fun golf cart ride touring her property we settled in the back porch swing and sipped our wine.

After visiting with Jane Rule and catching up on family, she called Taylor Grocery and ordered catfish dinners to go.  She sent us out the door with our wine in a travel bag, flashlights and a 45 minute wait.  We walked. 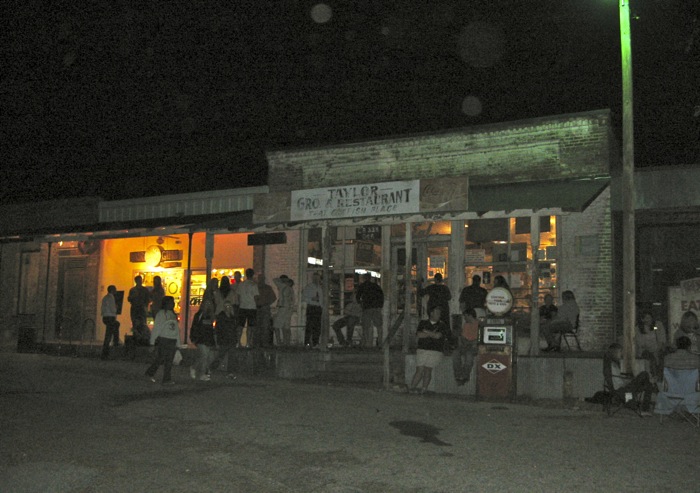 It was 9:45 and you could hear music slipping out the front door.  The hum of voices as people waited on the front porch.  A side parking lot was full of pick up trucks with their tailgates down, chairs all around with everyone sipping drinks in red solo cups, waiting for their time to be called.  And I thought the tailgating wasn’t until Saturday!

Joanne and I went inside to check on our catfish-to-go dinners.  The dining area was full and customers were standing everywhere waiting to be seated, enjoying the music.  A taxicab drove up with a couple of Alabama fans, eager to taste the Taylor experience. 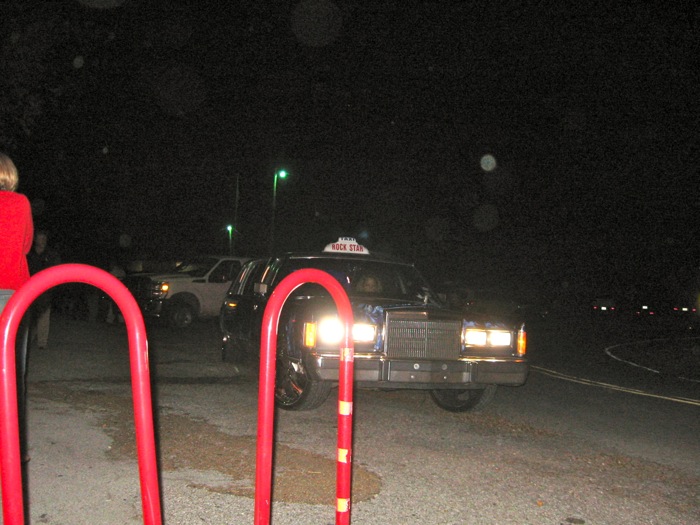 The catfish was good.  The music was good.  Joanne and I had stumbled on a great experience. 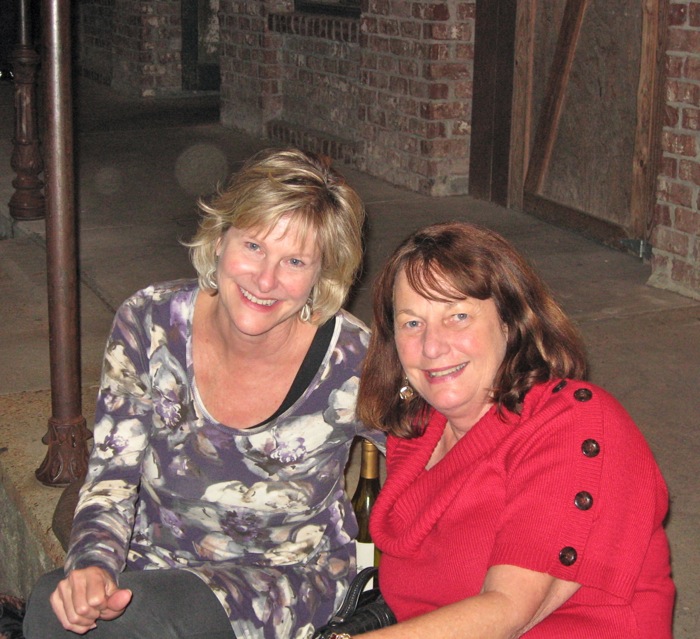 We went to sleep that Friday night listening to  the background buzz of people still waiting to get inside Taylor Grocery. 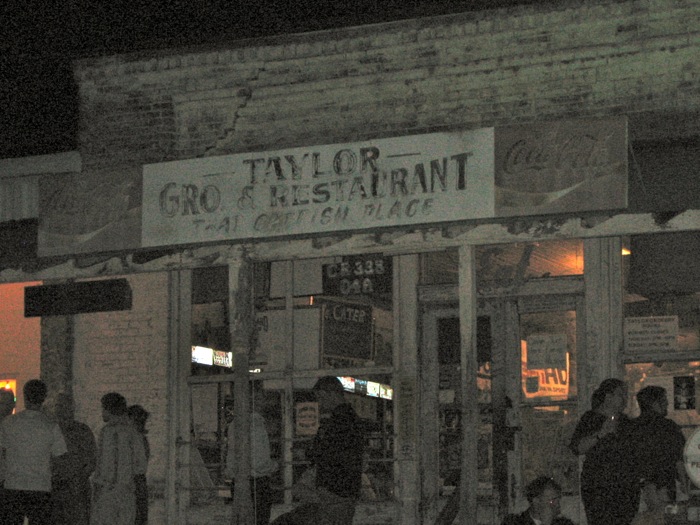 Oh and by the way, The New York Times wrote an article the next week about Ole Miss and The Grove and the must place to be Taylor Gro & Restaurant…That Catfish Place.

Waiting for Tailgating In The Grove on Saturday!

Watch for upcoming stories from my tailgating travels.  I welcome your comments, recipes and any inside information on your favorite tailgating spots.