A STORY ABOUT 2 SPECIAL PEOPLE…CAROL…

A STORY ABOUT 2 SPECIAL PEOPLE…CAROL AND MIKE JOYCE

This is an article I wrote for South Island Living Magazine remembering 2 very special people, Carol and Mike Joyce who both passed away this year.  Even if you don’t live on Amelia Island, I think you will appreciate their story.  It is about friendship, great athleticism, and the celebration of people who have touched our lives…made a difference.

Our community lost 2 special people this year.   Carol and Mike Joyce, longtime residents and Amelia Island Club members, will be missed by the many people touched by their lives.

Their history together began in Huntington NY on Long Island. Mike was a long time golf professional at Huntington Country Club, becoming head pro in 1976.   Carol, his wife, was an avid golfer and contributed greatly to the Ladies Golf Association at Huntington CC. 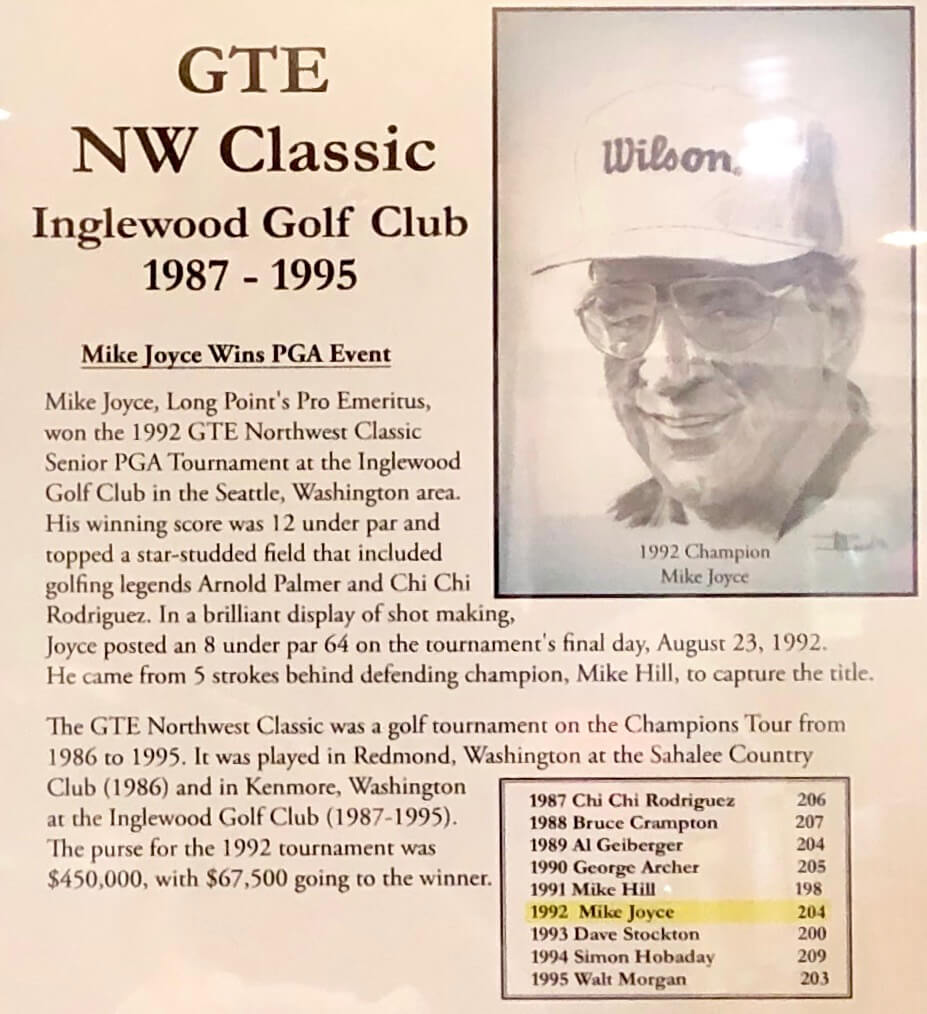 Gloria and Dave Miller (my in laws) were members of Huntington Country Club.  Gloria and Carol became golf buddies and best friends during the Millers’ time in New York, playing in many tournaments and Ladies events throughout the Long Island and  New York area.

After Gloria and Dave Miller moved permanently to Amelia, Carol would visit often, knowing this is where they wanted to live once Mike retired.  Carol and Mike purchased a home in early 1990’s.  Although Carol and Gloria had played lots of golf in NY they decided to enjoy other pasttimes here on Amelia.  They loved to boat and fish and from time to time even rented house boats for weekend jaunts along the St. John’s River in Sanford.  Carol and Gloria also loved to travel to Biloxi, playing the slots. And believe me they had the touch and were winners!

They were fixtures at lunchtime at certain local restaurants, The Marina Restaurant, being their favorite, although they loved Brett’s and Bonitas.  Gloria has her own memorial table at The Marina and our family sits there regularly….Carol and Mike will have their memorial table too!

Even before moving here permanently Carol and Mike shared in many Miller events.  I remember Carol and Gloria working tirelessly to get the right seating arrangement at our Amelia Island wedding reception in 1984. And Mike coordinating The Triplet’s 50th Birthday Golf Outing. 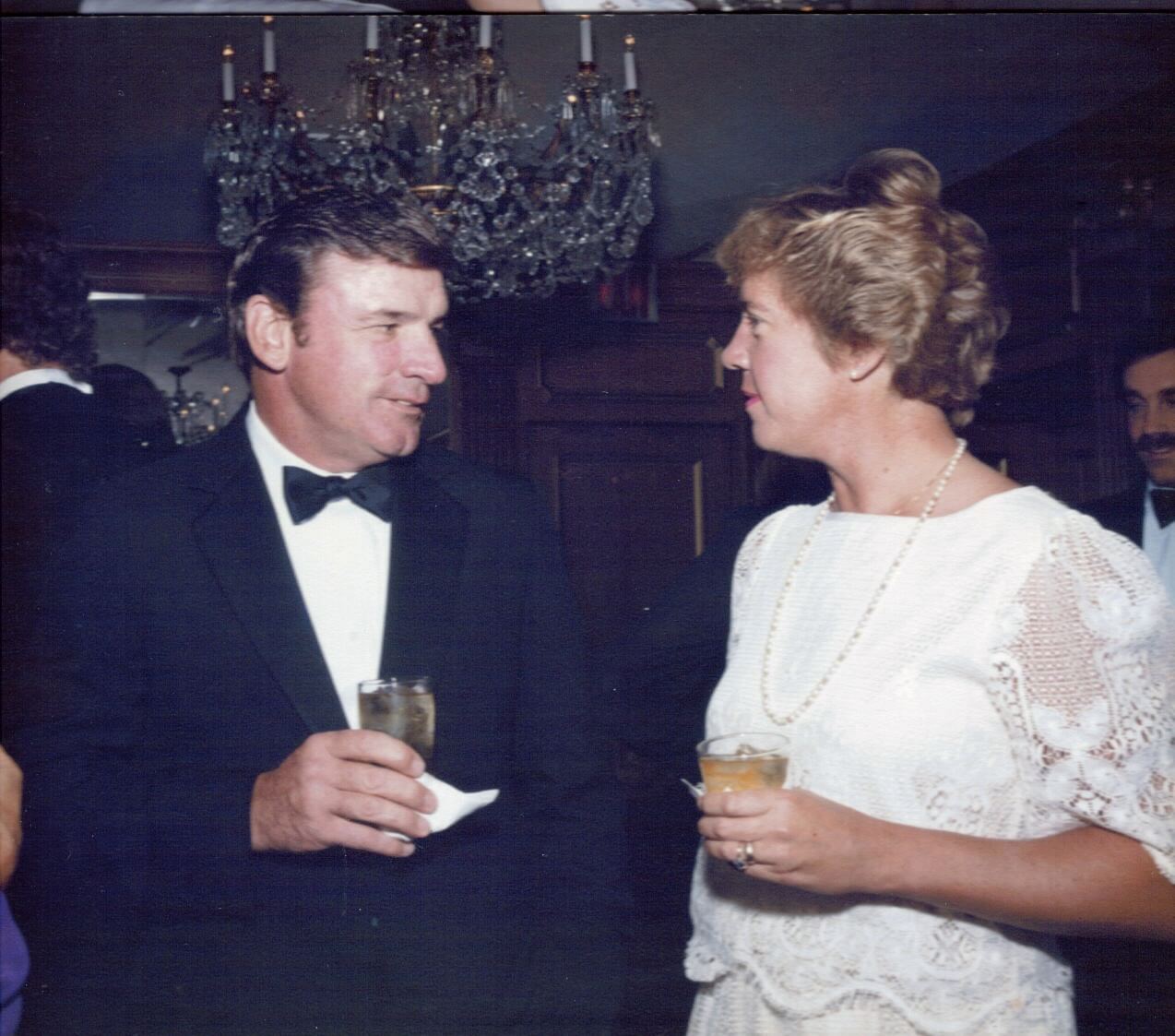 Carol we will miss your bright smile and enthusiasm.  We will always remember your positive attitude, and your friendship with Gloria.  (I will say that Carol always knew the latest happenings on the island, as she picked up lots of info at The Marina!)

Mike was born on Long Island NY in 1939. Mike came from a very athletic family.  He caddied at Bayside Links along with his two brothers, Tom and Bob, who were also PGA professionals.  Mike’s youngest brother, Kevin played basketball at The University of South Carolina and was captain of the 1972 U.S. Olympic basketball team.  Many may remember the US won the silver medal under extremely controversial rulings allowing the Soviet Union to win the gold.  The US team refused to accept their silver medals and to this day the medals are in a vault in Switzerland.  (worth looking up to read the entire story).

After turning 50, Mike, while head pro at Huntington Country Club, decided to play on PGA Tour Champions (The Senior Tour).  In 1992 after becoming a full time member of the tour, Mike won The GTE Northwest Classic at Inglewood CC in Kenmore Washington.  On the final day of the tournament Mike, 5 shots behind the leader, shot an 8-under 64 to win by two shots.  He played in 132 tournaments after turning 50.

Mike retired from Huntington CC and moved to Amelia Island in 1995, becoming a daily presence on the AIC Long Point Golf Course when not playing in PGA Champion tournaments.   Many golfers and wanna be golfers were treated to Mike’s attention.  It wasn’t unusual for Mike to just walk up to a struggling golfer on the driving range and suggest a slight change in their grip, or a change in posture or swing.

Many think of Mike as The Ambassador for Golf.   He showed equal enthusiasm for sharing his knowledge of the game not just in mens golf, but for womens and junior golf.

“As a PGA Professional coming to a new job you are generally focused on establishing new relationships with your members to set yourself up for long term success. When I first came to the Club 20 years ago I was fully invested in learning each member and setting up goals to drive great golf experiences. When I found out that one of our members was a retired and lifetime PGA Member my initial thought was that I would have someone looking over my shoulder at every turn evaluating the success and failures of each decision I made. I couldn’t have been more wrong. Mike Joyce not only became someone that I would call my friend but a lifetime professional mentor who only cared about my success in the eyes of the club and every golfing member. Mike truly loved not only the game of golf but the people who were around it in every capacity. He considered himself part of the staff as did we. He was quick with a smile or a kind word even when he had to make a golf ruling that we all knew no one would like. His memory of days spent in the golf business never left him and he always relished an opportunity to recant a story from his youth, young professional career, or life on the senior tour which we all took in nugget by nugget.

If you are lucky in life you will be blessed with one person that you can always count to be there in your professional career to help guide you along the way.  I was blessed that he also turned out to be a wonderful friend who I had the pleasure to share countless rounds of golf with at our favorite golf course….Long Point.” 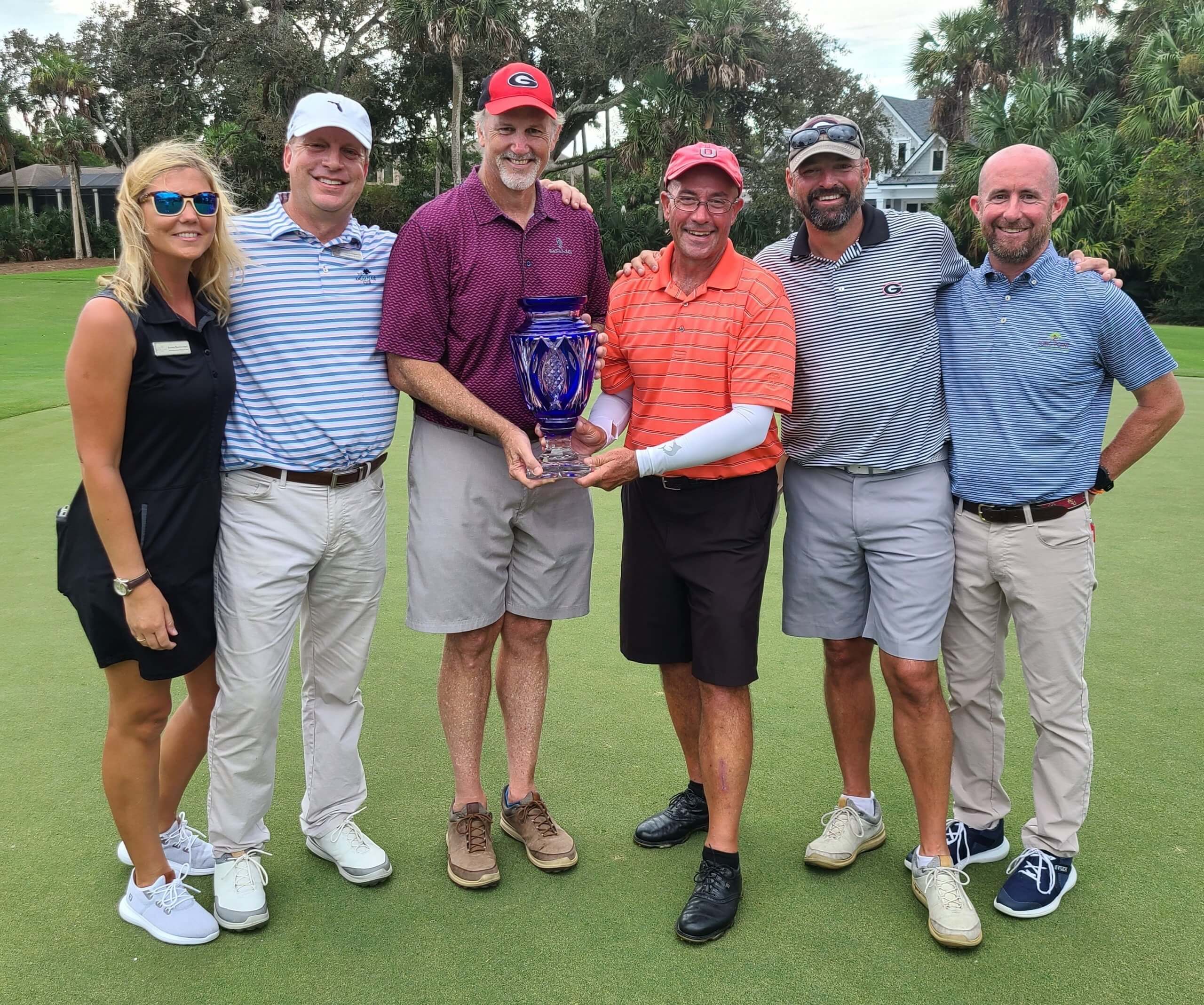 Matt Millar, Board of Directors Amelia Island Club and Chairman of the Golf Committee, shares with us his experience with Mike through his son’s eyes….

“Tanner Millar, 12 years old at the time and learning the game, remembers the first time he met Mr. Mike at Long Point.   Tanner recalls he was slicing everything all over the range and Mr. Mike came up and started a conversation with Tanner who is now a Fernandina Beach High School Freshman golfer.   Tanner says Mr. Mike told me to to do two things with my grip and I started hitting everything straight.   “I couldn’t always hear or understand what Mr. Mike said, but he always showed me what to do!”

Matt wrote, “Mike was a true ambassador to the game of golf for all…he didn’t discriminate  in his passion for teaching and sharing.     Young, old, men, women, experts or beginners, Mike wanted everyone to love the sport like he did.   The Long Point golf staff and tournament committee when deciding a proper tribute to Mike thought of remembering his legacy by awarding the annual men’s Member/Member championship winners the Mike Joyce Trophy in his honor.    The committee made up of men and women almost hit a stalemate standstill when the women golfers felt they should also have their own Mike Joyce trophy as well.   This is a perfect example of how all golfers felt Mike’s impact on the game at Long Point.”

Starting this year, Mike will be remembered every year when the beautiful Waterford crystal trophy won at his PGA Tour Champion tournament will be presented to the Men’s Member Member winner. The trophy will be held in a place of honor in the Clubhouse. 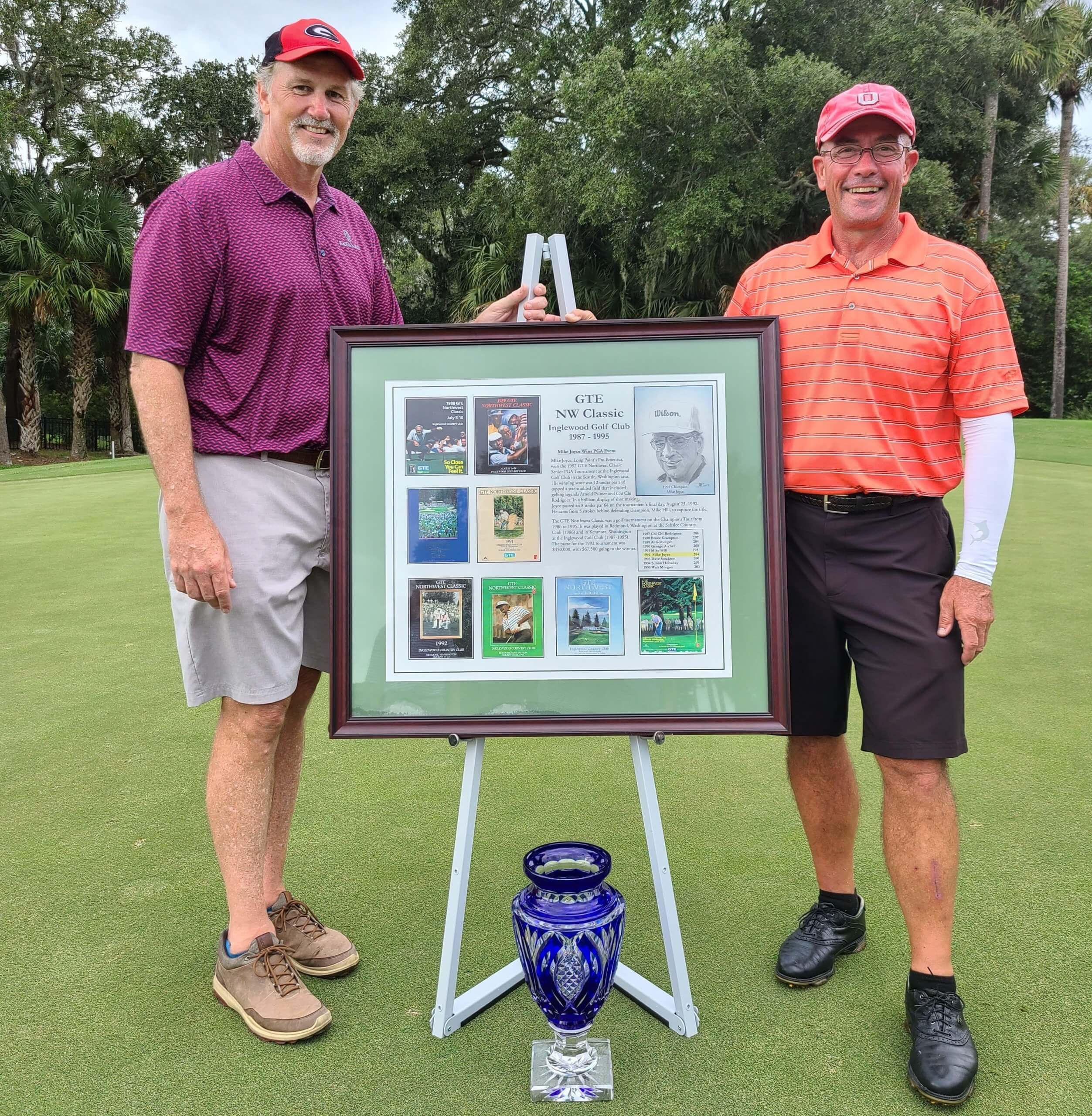 Many will remember Mike’s help with their game of golf.  I was also on the receiving end of a Mike Joyce tip.  Several years ago, Mike saw me struggling on the driving range before a round…he came up and said, “Kathy change this with your grip…and I shot a 41 on the front nine, which was unheard of for me.   Unfortunately the back nine went a little down hill, but I still shot the best score in my life.  Thanks to Mike Joyce!

And a little aside since I am writing this article…

Mike gave Dave (my husband),  his first golf lesson at Huntington CC in 1972.

Carol and Mike, thank you for being such an important part of our community and for influencing so many of our lives.  We will miss you greatly!

The Art of: Holidays, Lifestyle & Travel

It's that time of year when families, businesses and towns light up their... continue reading

FEELING THANKFUL ON THIS THANKSGIVING DAY

Today on Thanksgiving I am full of gratitude... THANKFUL FOR... family and... continue reading