MARTHA BOYLE…PERSPECTIVES ON LIVING IN OLD… 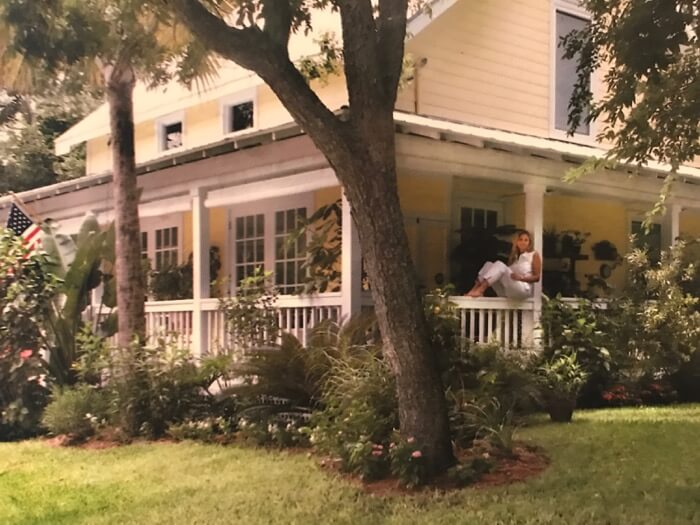 I hope you read the article on Martha Boyle and Cumberland Island in the September issue of South Island Living. You can read it HERE if you missed it.  Now for Part III…Martha’s Perspective on living in Old Town Fernandina and her efforts to preserve its historical integrity.

Martha moved from Cumberland Island to Old Town, Fernandina in the summer of 1997.  She bought a house (shack) on White Street and the lots on Block 30.  After extensive renovations she and Rick lived in the yellow cottage until 2008.  In 2008 they built a new house on Block 30.

A lot of people would say they saved a historic structure and her reply was always “that wasn’t preservation, it was a makeover.  We turned an ugly shack into a pretty cottage.  There wasn’t anything historic about that house except the fireplace.”

So how did Martha spearhead saving the historical integrity of Old Town?  We first must understand the specialness of Old Town.

In Martha’s words, “Old Town was originally settled by Timucuan Indians, probably because of its high location along the Amelia River and its fertile soil.  Later, the Spanish and British recognized Old Town as a strategic place for its defensible position in the western Atlantic, and because it was close to the gold route from South America to Spain.  Old Town was platted by the Spanish in 1811.  It was the last town platted to the ‘Laws of the Indies’ in the Western hemisphere.

The original 26 block grid remains nearly intact to this day.  Some changes due to building N. 14th St. and erosion have occurred, but for the most part, it is as it was originally platted.  This might not have been the case had some interested parties, ‘Martha’ included, not realized that the plat/grid was really the only thing remaining in Old Town that had any historical integrity.  There were no original structures remaining in OT from the time it was platted. 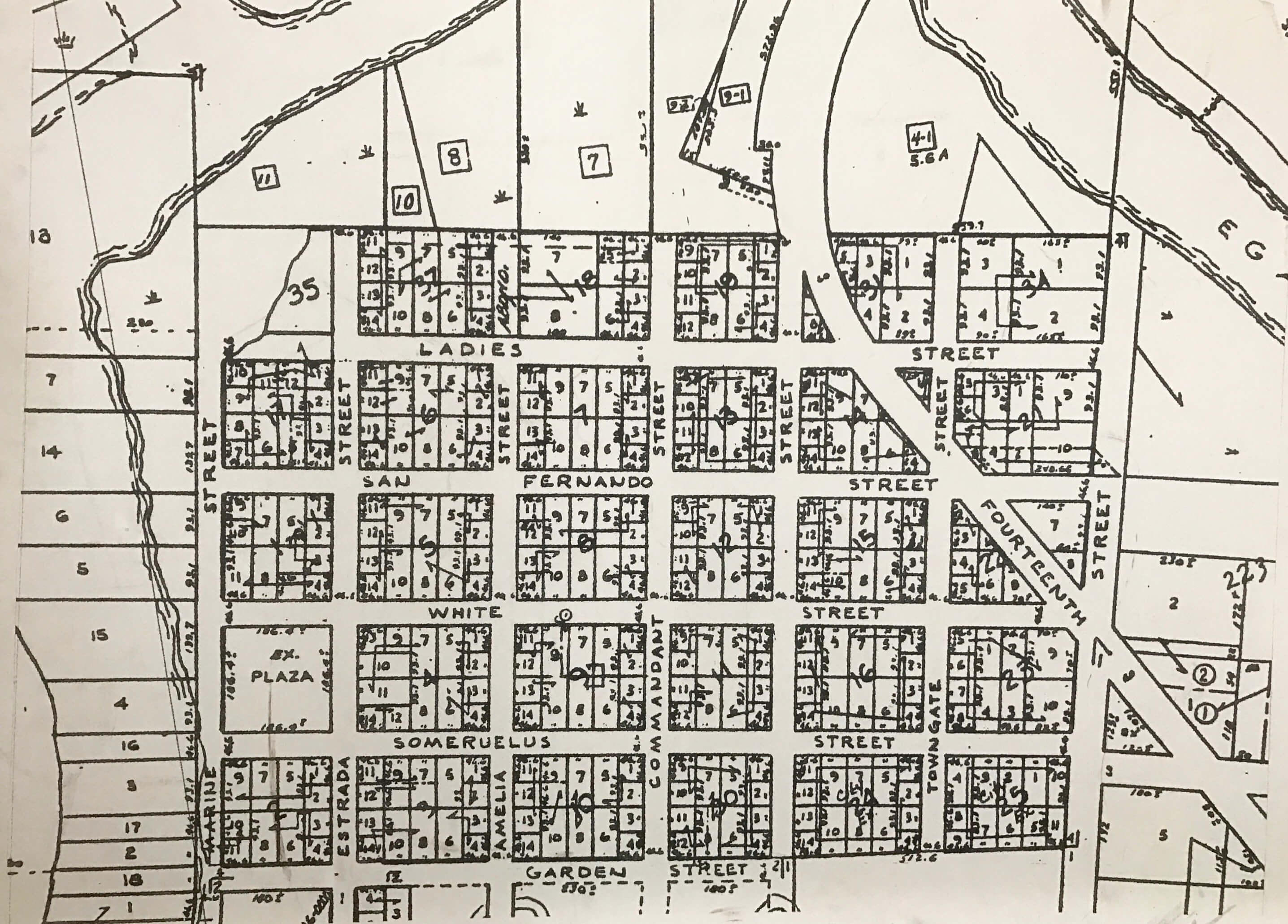 The design that Surveyor George J.F. Clarke (1774-1836) laid down in his 1811 plat is still visible today.  Blocks vary in size and consist of eight or ten of the Spanish lots called a peonia.  A peonia is about 46 x 93 feet.  This was the amount of land that a Spanish foot soldier (a peon) would have received in exchange for his part in the conquest.  The long side of the peonia runs North-South.   On the East and West side of each block, peonies are divided in half and are called media peonies.  Old Town today contains about 23 blocks.”

Martha knew without a doubt that Old Town was a very special place.  After reading as much as she could at the public library (remember the internet was still not widely used) and talking to locals who had an interest and knowledge of Old Town, it was clear to Martha that something needed to happen to make sure “this place was protected.”

Martha states, “Old Town had already been recognized on the National Register of Historic Places, but other than that it was not really recognized for its history and plat.

One thing I found interesting was that OT was zoned R3, which was a zoning that required 20’ front & rear setbacks and 10’ side setbacks.  That seemed a little crazy on lots that are only 46’x93’ and the Media Peonies were only 46’x46’.  This zoning created some challenges and also the need for a lot of variances before anyone could build or expand.”

Remember, there were no original structures remaining in OT from the time it was platted.  With the help of a friend, Courtney McCranie, Martha started bringing this to the attention of City Hall.  “While everyone at the City agreed it should be protected, it wasn’t exactly a simple task to get things rolling.  But eventually the City hired the University of Florida, and led by the expertise of Bill Tilson at UF, the Old Town Guidelines were written and using that document, Courtney and I, along with a few others, spent nearly 2 years writing a code to be presented to the City Commission for adoption.  Finally in Jan. 2000, the ordinance was passed and the Old Town Historic District with its own zoning, uniquely applying to Old Town and its grid, replaced the previous R3 zoning.”  This new code did much to protect Old Town, but the one thing Martha is most happy about is that no one can build over a lot line.  This protects the original plat/grid that was platted according to the Law of the Indies and one of the few grids (if not the only one) that remains intact and protected in the world.

What is interesting here is that when Martha came to Old Town, it was certainly “sleepy…the folks living there had lived there for many years.  It’s not exactly a place you drive by, it is a destination.  You don’t get to Old Town unless you are GOING to Old Town. These people valued their quiet neighborhood.  There had been no new construction, no renovations, no improvements until I moved there.  A stranger invading their space…they weren’t exactly welcoming.  I was about to embark on an extreme renovation project and this would bring workers and noise and most of all, change to their quiet way of life.  I call it the Renaissance period.  It was a rebirth of sorts for Old Town.”  Once she and Rick started dating, he became interested in the project.  “I felt like I had found my comrade.  I didn’t feel alone anymore in having the white hot spotlight on me.  Rick jumped right in, doing much of the work and his artistic visions and abilities added so much more than I had originally planned.  More people came to Old Town and started buying lots, started building and started renovating older homes.  I think the other residents realized change was inevitable and eventually they accepted it.  They certainly liked the increased value of their property as the land around them was selling at record prices.”  In 1997 Martha bought 2 lots with a shack for $25,000.  The next year, a single lot was selling for $16,000 and the year after, $32,000.  Within 5 years  lots ranged from mid $50’s to $80,000.  Her yellow house got a lot of attention and the transformation intrigued many people.  The yellow house is in Jan Johannes book, “Tidewater Amelia”. 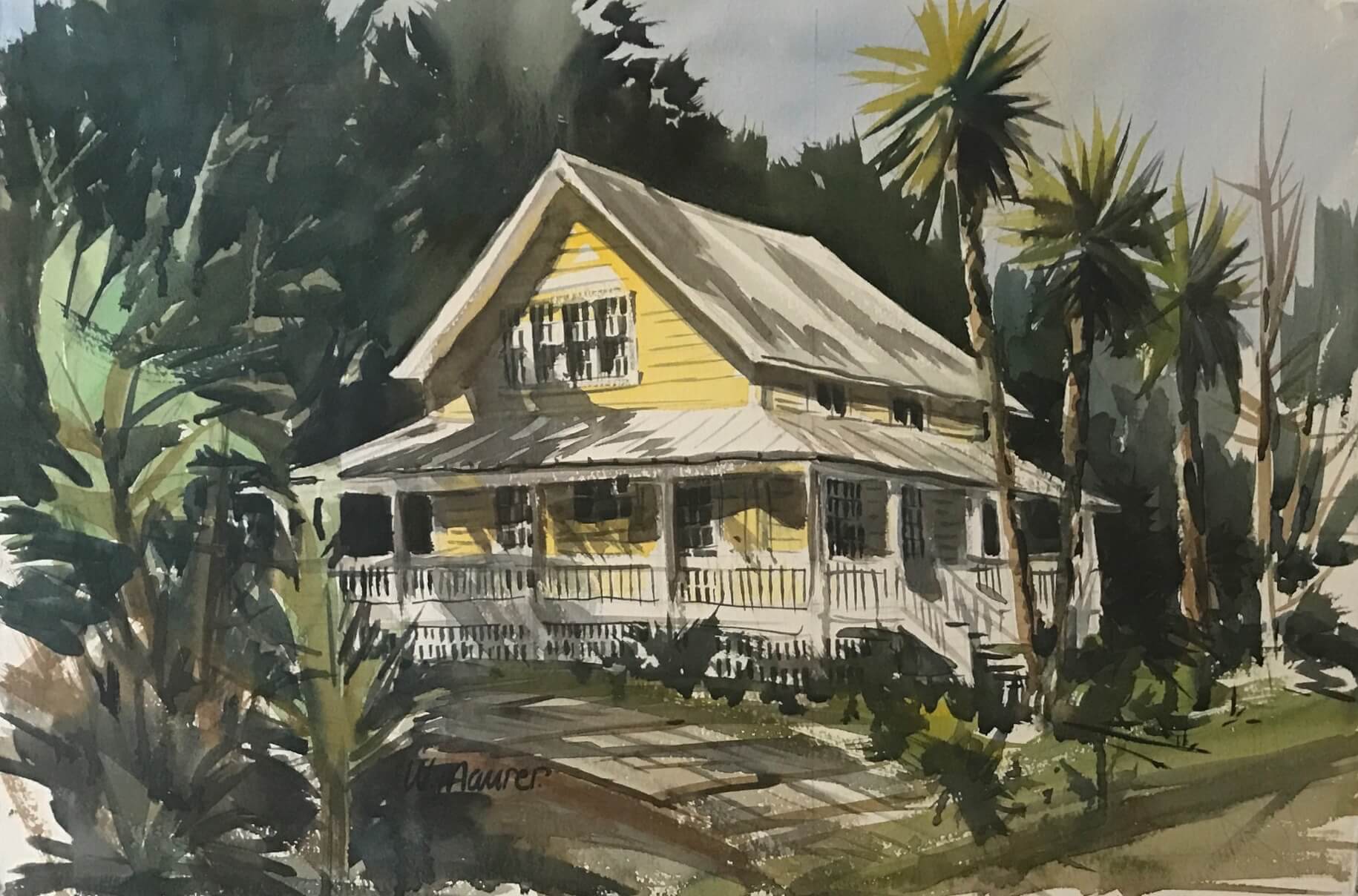 Martha and Rick built a new home on 2 lots on Block 30 and moved there in 2008.  The interesting thing about this home was how they dealt with “not building over the lot line” as was part of the code Martha helped write.  Two structures were built with a covered walkway joining the two.  Preserving the original grid! 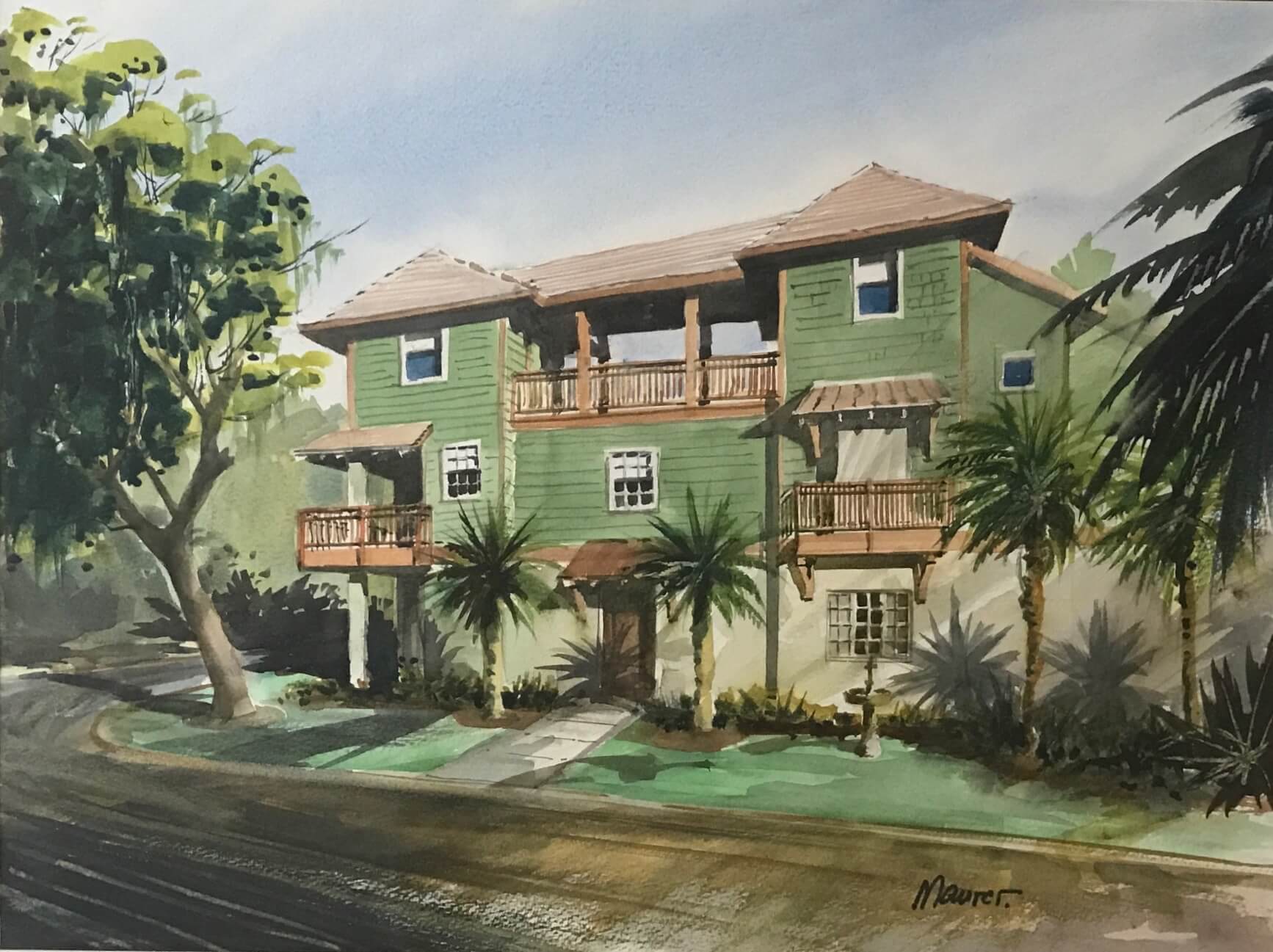 In 2013 Martha and Rick bought a lot on the Amelia Island Plantation.  They designed and built a house, moving in August of 2016.

I asked Martha if she felt like she has come the full “Charles Fraser” circle.  After living on Cumberland Island (the place Charles Fraser first wanted to develop) to ending up on the Amelia Island Plantation (Fraser’s project in the 1970’s and 80’s) a wonderful place to live thanks to his vision of preserving the grand oaks and setting aside certain amounts of green space.

Martha replied.” Development in keeping with the harmony of nature…that is what I find to be so important and so appreciative that Charlie Fraser had that vision.”

Martha says, “the move from Old Town to Amelia Island Plantation (AIP) was about as much of a change as moving from Cumberland Island to Old Town!  Not as much, but definitely a significant change.  We had made quite a contribution to Old Town, renovating 3 houses and building a new one.  At first we didn’t know if we would build.  But, eventually we started getting excited about designing and building a new home and in some ways a new life.  It was a move from the very north end of the island to the south end.  One might not think an island only 12 miles long could have such diversity, but there is!  When we were designing our house and landscaping, we knew we wanted something different.  We took various elements we loved from our other designs and incorporated them into this new house.  Our fireplace is very similar to the fireplace in the yellow house in Old Town.  We loved that fireplace (remember, it was the only real historical feature of that house).  The new house in Old Town was built around a courtyard that opened to the sky and we have that now, too.  The design of this house started on a paper napkin at dinner one night.  We just both started sketching on napkins and talking about it and realized it was the right time to start this new adventure and we already had the most beautiful setting to carry out our visions.  It wasn’t until we spent our first night in our new home, when I woke up early the next morning, went outside for the first time with my coffee, took in the sounds of nature, that I realized I had sort of come full circle from a connection with Charlie Fraser’s visions.”

Thank you Martha for sharing your stories about life on Cumberland Island and Old Town.

I hope you read the article on Martha’s 12 years of living on Cumberland.  If you missed it you can read it on my  here The Art of Living blog.