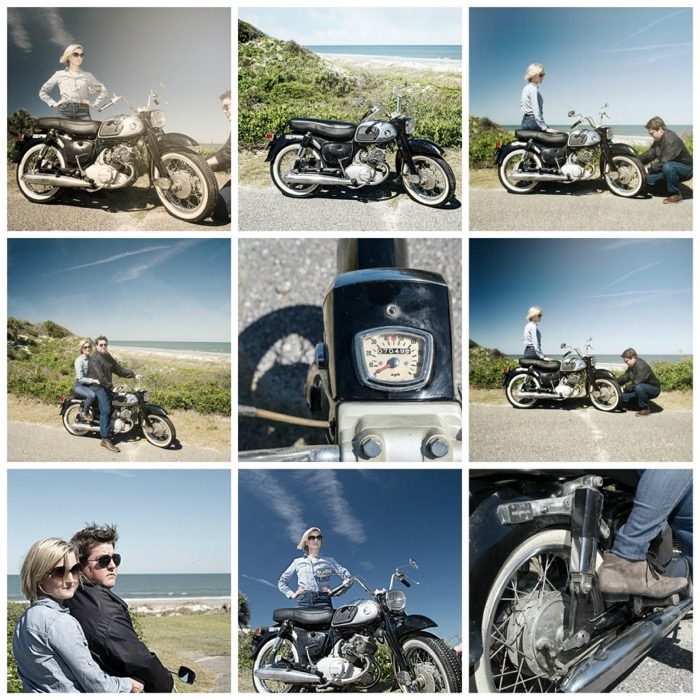 The Concours d’Elegance held on the Amelia Island, Fl every March gets everyone thinking about antique and vintage vehicles.  Vintage automobiles, vintage motorcycles, vintage anything…

To celebrate the success of The Concours d’Elegance (raising many $ for charity)  we are featuring a vintage 1965 Honda Dream- a sweet Cafe Racer owned by Plantation residents, Susan and Doug Bennett.  They graciously loaned us their baby for the afternoon shoot and we asked Gloria and Mike Hart to show us how to look and act cool on a cafe racer. 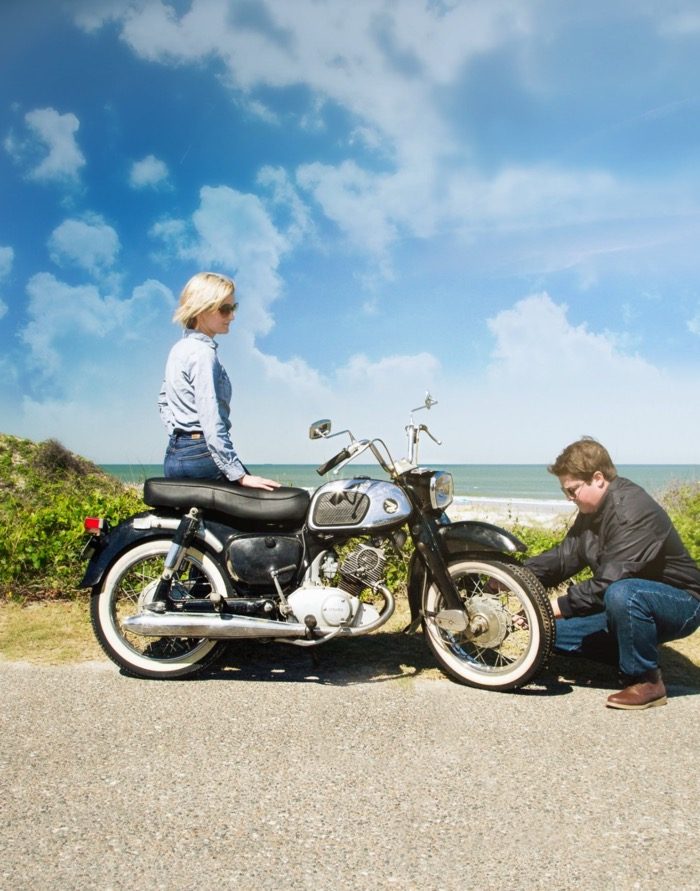 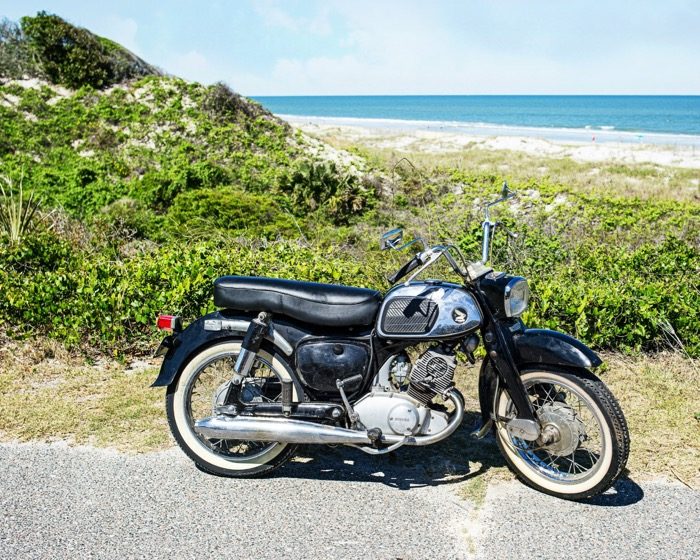 My 1965 Honda Dream was first owned by a woman in Milford, Connecticut.
In 1965, she was a new divorcee and was anxious to meet men.
What better way to meet a man than with a motorcycle?
It did not take her long to find Mr. Right as she put only 7000 miles on the Dream. 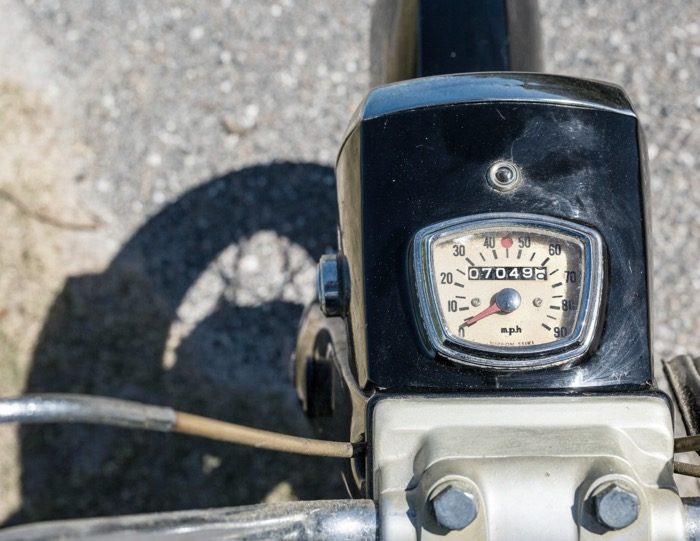 The bike was parked in her garage and remained there until 2004 when I spotted an ad on Craigslist for a cute little woman’s bike.
I had attempted to pass the “Learn to Ride” program in Connecticut and found the motorcycles supplied by the state quite heavy.
My thinking was that I needed a cute little woman’s bike to meet with success.
I headed to Milford to take a gander at the Honda Dream. 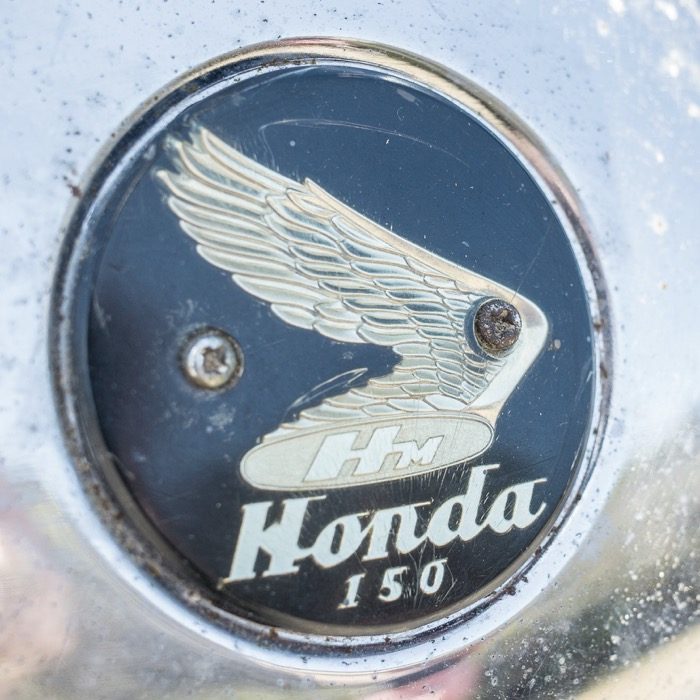 Under a tarp in the far back corner of a garage, sat what would become My Sweet Dream.
The original owner was now in an assisted living facility and her daughter had decided the bike was taking up needed space.  It was love at first sight!
Unfortunately, the price was steep and I felt it best to think about the purchase.
Two weeks later I received an email.  The family wanted to know if I was still interested in the motorcycle and if so Mother wanted me to have it.  Everyone who had come to check out the bike planned to use it for parts.
She knew that was not my intention and never would be.
A 1965 Honda Dream for free!
It was a no brainer!
I made the drive to Milford, Connecticut, from my home in Glastonbury, the next day.
When I arrived Mother was there.  She wanted to meet the new owner of her Dream.
Clutched tightly in her hands was a brown paper bag, the kind you fill with groceries.
Mother was all smiles as she handed me the bag and declared,
“When you wear this and are driving down I-95 no man will be able to touch you.”
Inside the bag was a very crunchy one-piece red leather jump suit complete with fringe.
This was not the only treasure I was given that day.  Mother also awarded me her first motorcycle pin.
I continued to keep in touch with this generous lady until her passing six years ago.
The Sweet Dream is now my treasure and even though I rarely ride it, the memories of how I acquired it bring me smiles.
Thank you Susan for that great story.
Our super cool couple on this Honda Dream…Mike and Gloria Hart 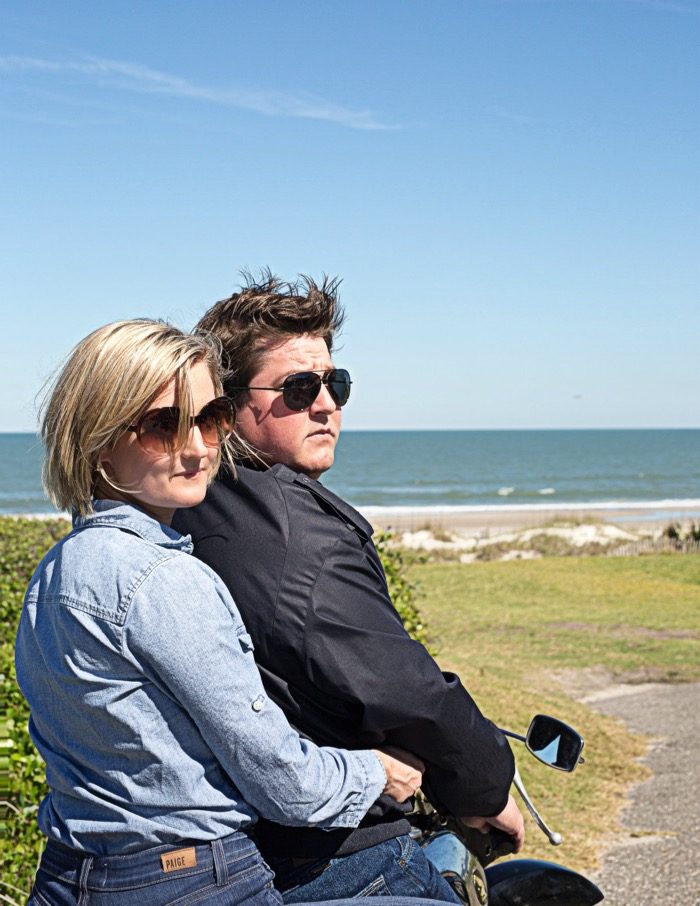 The Amelia Island Plantation is special to the Harts.  Gloria grew up visiting her grandmother and grandfather on the Plantation.  Her family would come every spring break and often the week after Christmas through New Years.  Gloria’s love for the Plantation and especially Walker’s Landing which is 3 doors down from Pops’ and Glo’s home, influenced her decision to be married in the Chapel and have her reception at Walker’s Landing.

She and Mike began their married life on Amelia Island, moving here right after their honeymoon.  Gloria had just graduated from North Carolina State University’s College of Veterinary Medicine and most of you know her as Dr. Hart, one of our favorite vets with Fernandina Beach Animal Hospital.

Mike is a technical sales representative with James Hardie Building Products.  The company specializes in fiber cement exterior cladding but most people know it as Hardie board.

We had to revisit the 60’s to choose the clothing appropriate for this special bike. 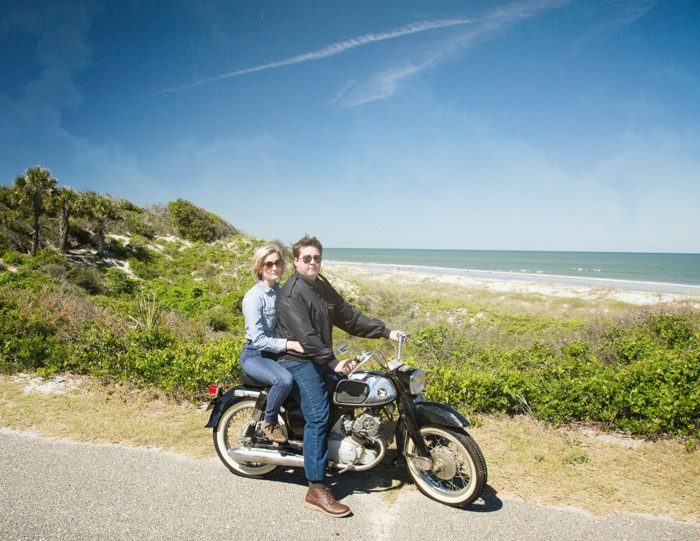 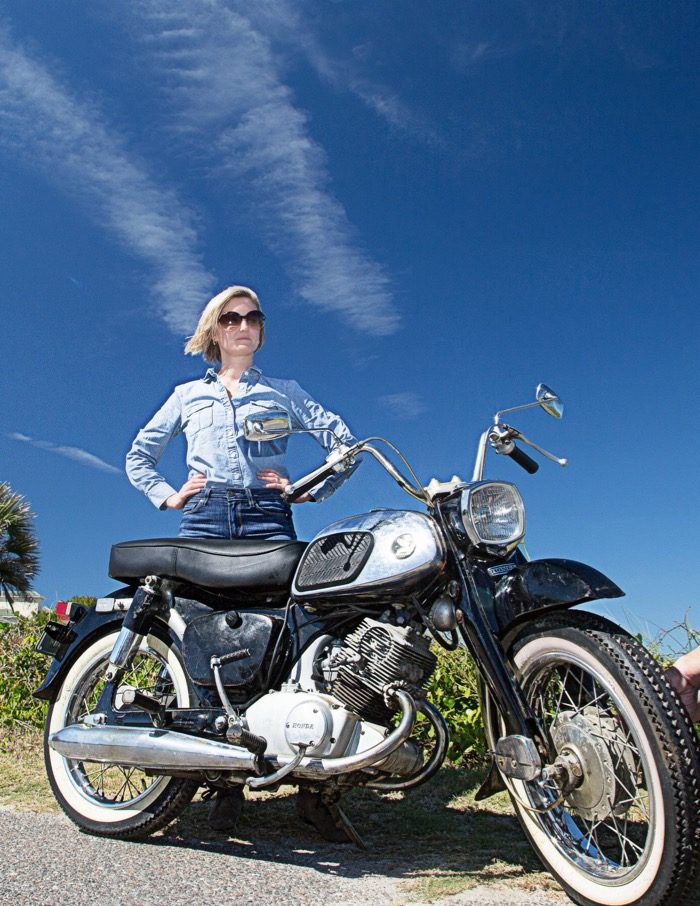 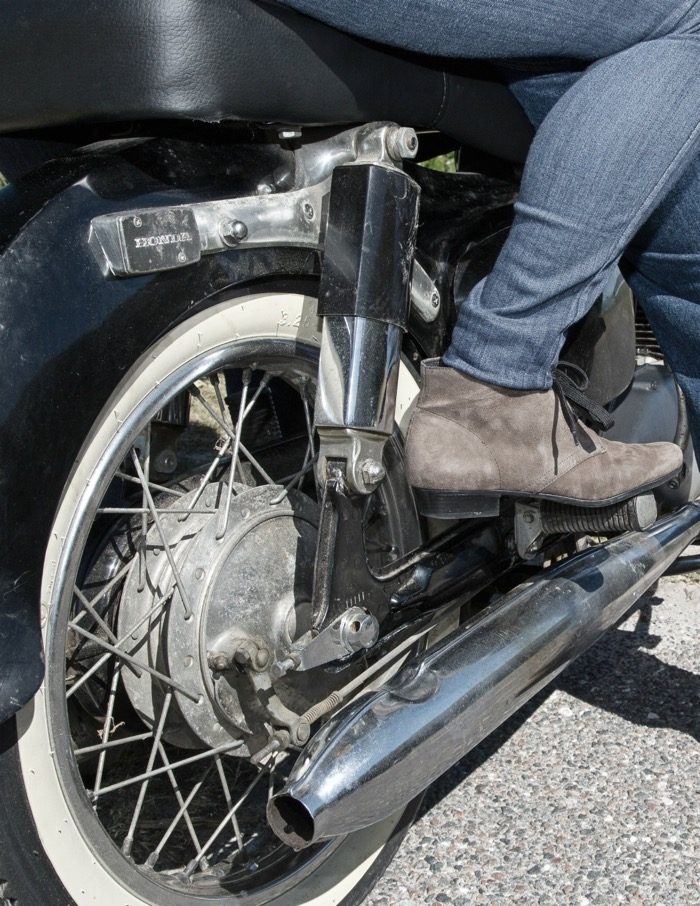 Steve McQueen and Jacqueline Bisset on the set for the movie Bullitt in 1968. Steve McQueen was famous for his acting as well as his passion for motorcycle/car racing.  Two of his most memorable movies involved chase scenes.  The Great Escape (1963) featured  the famous jump over the fence scene with Steve’s Triumph TR6 Trophy motorcyle.

During my research phase I watched Bullitt for the first time in years.  I remembered the famous car chase with the bad guys driving a black Charger and Steve McQueen driving a Mustang.

I also remember seeing this photograph with Steve McQueen and Jacqueline Bisset in San Francisco during the filming,  but the famous Triumph motorcycle was never in the movie or at least with McQueen driving it in a chase scene.  A cafe racer did spin out during the car chase.

We had fun trying to recreate an iconic photo.  Thank you to the Harts for being such good sports and to the Bennetts for the use of their bike! 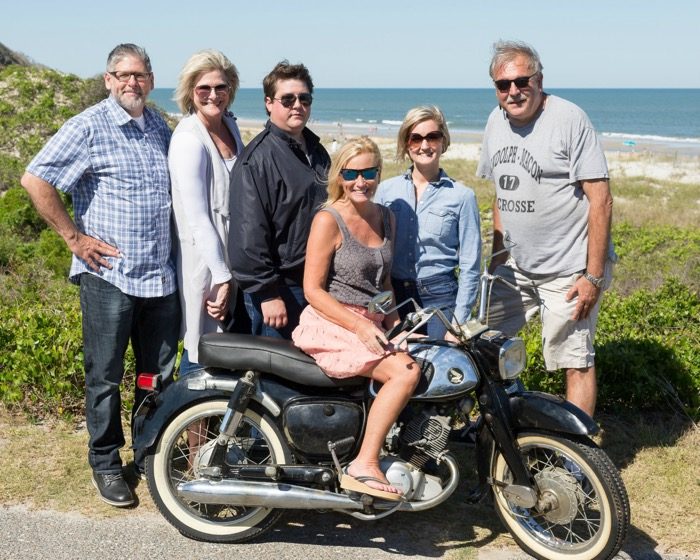 Thank you Susan Scarborough for your wonderful photographs!

Think it is time for another Friday Night Flicks party.  Come celebrate with me!  I’ll save you a seat at the table.

And just in case you want to see more…